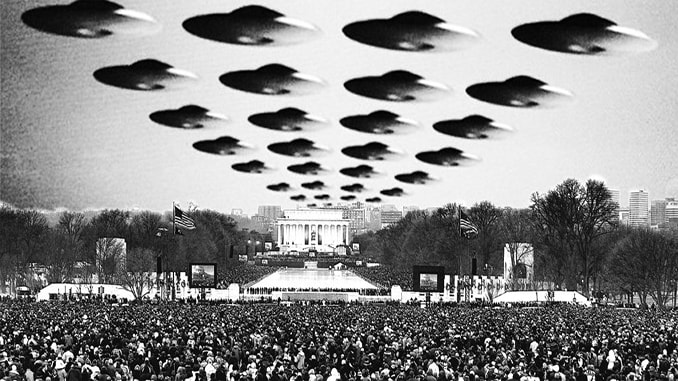 We’ve hit a snag in the progression of new drone regulations, and it’s not related to the current political environment regarding curbing new regulations.  There is a big technical hurdle to overcome before the industry can move on – and there is a legislative deadline of July 2017 to solve it.

After the execution of Part 107, the next two scheduled Notice of Proposed Rulemaking (NPRM) were to be regarding flights over people (largely influenced by the CNN Pathfinder Initiative) and extended operations (also known as BVLOS operations – largely influenced by the PrecisionHawk and BNSF Pathfinder Initiatives).  A draft flights over people NPRM was circulated amongst regulatory agencies back before the new year – but didn’t make it out alive.  Both have now been delayed without a proposed ETA.

Flights over people were originally supposed to be the relatively easy ones.  Create some categories of sUAS based on their relative risk of causing damage to people on the ground.  Then create some standards and operational procedures for risk mitigation within those aircraft categories – publish – done.  In reality, it became much more complicated.

So, what’s going on?  Something unexpected – security concerns.  I’m not talking about the counter-UAS systems that employ radar or command link RF detection in order to detect and maybe neutralize a threat.   I’m talking about something very basic here:

“Who is that, and are they allowed to be here?”

That’s the first question any law enforcement or first responder needs to have answered when encountering an unknown drone situation – and there is no tool on the market that allows the officer to answer that question.  The legislative term is “remote identification.”

“Legislative you say?  What are you talking about?”

Yup.  There’s a law on the books right now that says we need to develop “requirements for remote identification of aircraft systems” by July 15, 2017.  It’s Public Law 114-190 – also known as H.R. 636 – FAA Extension, Safety, and Security Act of 2016.  Yes, that one.  The FAA extension that got passed in a hurry last summer amidst all the flurry of discussion regarding FAA privatization.  This little gem was snuck in.  Here is the exact brief language: 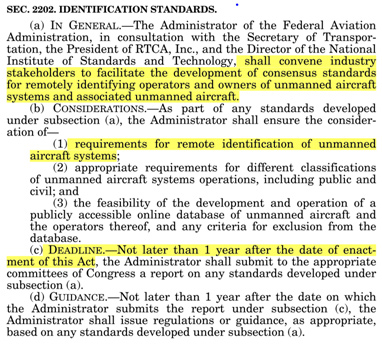 Given where we are today, it is unlikely that any new draft drone regulations will be published until this issue is solved.  The industry in the US – maybe the world – is on hold.

So why haven’t we heard more about this?  Honestly, not sure – but we’ve got some work to do.

Here is a concept for how we see a possible solution with today’s technology.  First, there is a really cool free app on your smartphone you can get called Plane Finder AR Free by a company called Pinkfroot.  With it, you literally point your smartphone at the sky and it shows you nearby aircraft and who they are.  Here is what it looks like from my back-yard: 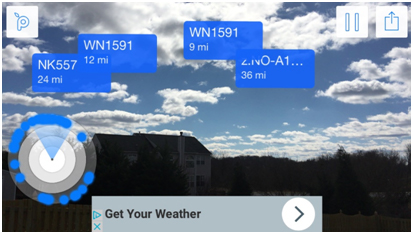 Now, this is accomplished with the use of ADS-B transceivers onboard the aircraft, and a network of enthusiasts on the ground with receivers all networked into the cloud-based platform.  This particular architecture isn’t ideal for remote identification because it uses a ground-based network – but the concept that the app demonstrates is what we need.  Here are a few guidelines:

The solution from our perspective has 3 components: 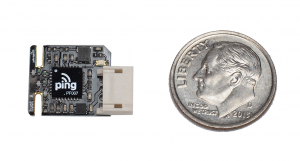 Not long ago, I wrote an article about the case for low-power ADS-B for drones.  In it, I introduced our T-UAT ADS-B chip, which can transmit and receive ADS-B at an extremely low transmission power for visibility from 1-5 miles.  It is certainly our position that the ADS-B frequency and message structure would derive the most benefits for remote identification because it would double as a Sense and Avoid (SAA) aid.  (See DJI’s recent announcement about ADS-B on the M200).  However, the reality might be that the ADS-B debate will take longer than we have to solve this problem – so we can simply shift frequencies into an available band – and yes – we can do that.  If we did that, we could customize the message to include more identification information such as pilot name, phone number, COA authorization, or any other number of items that would help answer the questions “Who is that and are they allowed to be here?”

Just so happens that we have a low-cost receiver – the pingBuddy that can also be used for native ADS-B, or frequency shifted to the new band.  PingBuddy has a Wi-Fi hotspot capability to transmit the target information for display on any number of apps.

There are already a number of apps that work with our pingBuddy receiver.  Perhaps a purpose built one like the Plane Finder AR will be needed, perhaps not.   Likely the app would have access to the FAA registration database to pull up additional information on the operator. The app is actually the easy part and before it’s over with, I’m sure there will be dozens.

The train is stopped – but right now not everyone is aware of that fact.  In order to keep moving, we need a solution for remote identification.  Low power ADS-B air-to-air transmissions with the aid of low-cost receivers for security personnel and an app for display is the overall best solution.  If ADS-B is a bit of a tricky wicket right now – we can shift to an open frequency – but the concept remains the same.