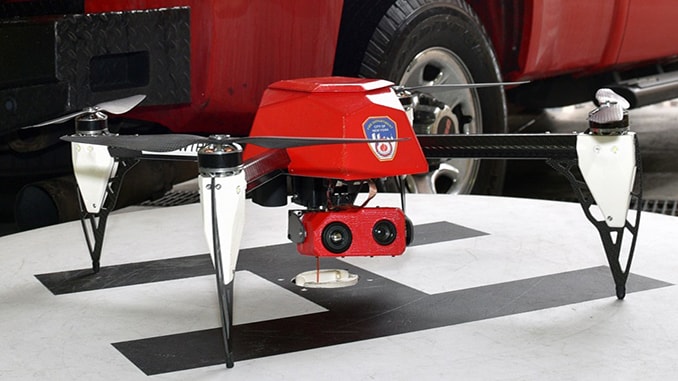 FDNY Launches Drone For The First Time To Respond to Fire

FDNY launched its first ever tethered drone to respond to a fire in a 6-story building on Crotona Park North in the Bronx.

The $85,000 FDNY tethered drone weighs 8 pounds and incorporates both a high-definition camera and infrared camera. These capabilities allow the drone to transmit live images of a fire operation to the Chief in charge of the incident.  The drone’s camera allows Chiefs at the command post to see where Firefighters are operating on the roof of a building and to make decisions to help suppress the fire and keep FDNY members safe. The image is fed directly to the Incident Commander and is also shared with senior decision makers in the Fire Department through the FDNY Operations Center.

“We deployed the drone for the first time in support of a 4th alarm fire in the Bronx,” says FDNY Director of FDNY Operations Center, Timothy Herlocker. “We were able to get a good view of the roof, which allowed the Incident Commander on the ground to view the Firefighters as they were conducting roof operations, venting the roof and putting water on the fire.”

“This fire was helped by our drone, said Deputy Assistant Chief Dan Donoghue, the incident commander at the 4th alarm fire. “The roof started to fail and we had a lot of great radio reports but that’s only verbal, so with the drone we had good visual pictures and it really helped us make decisions to put this fire out and keep our members safe.”

The FDNY drone is tethered using a small cable that carries electricity up to the device, which gives the drone an unlimited flight time. The drone can stay aloft for as long as necessary to keep an aerial view on the target. All controls, data, and power transmit back and forth through the tether preventing interference with radio frequency signals. The drone is piloted by specially trained FDNY Firefighters from the Department’s Command Tactical Unit. The Department currently has three drones in its fleet to deploy as needed.

“This new technology is going to make a positive impact in our fire operations,” said Fire Commissioner Daniel A. Nigro. “The drone’s camera gives our Chiefs a view they never had before. It’s an important tool that will make our members, and the people we protect, even safer.”