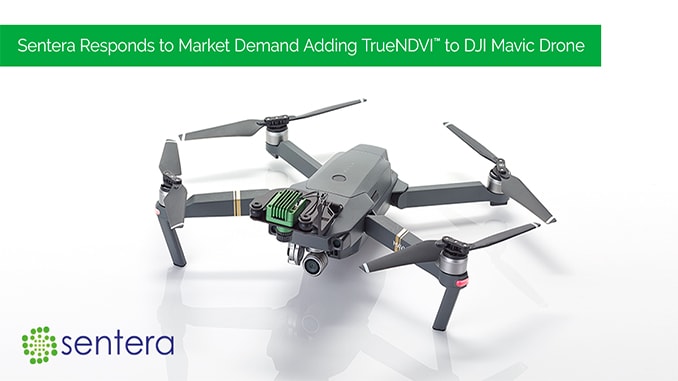 Sentera today announced its ability to convert a DJI Mavic ™ drone into a precision scouting tool that collects TrueNDVI™ crop health data. The ultra-lightweight, super-precise Sentera NDVI Single Sensor is integrated onto the pocket-sized Mavic drone, featuring one of DJI’s most sophisticated flying cameras ever. In a single flight, visual-band RGB, near-infrared (NIR) and normalized difference vegetation index (NDVI) data is simultaneously captured, and then interpreted in the field to quickly detect problem areas and respond with action. The small yet powerful Mavic drone with NDVI Upgrade ensures precision while saving time.

“The Mavic with TrueNDVI upgrade is a highly anticipated offering for our customers who have been seeking a compact, easily transportable drone for the 2017 growing season,” remarked Kris Poulson, Vice President of Agriculture for Sentera. “Growers and agronomists are keenly interested in this platform due to its collapsible design, affordability, and precision. We have growers looking to use this now, as their first crops emerge and they have an opportunity to make influential input decisions.”

While the Mavic is only 1/6th the size of other popular DJI platforms, it retains a robust flight time of 27 minutes due to its powerful, high-efficiency motors. Paramount to the Mavic’s great feature set is its FlightAutonomy technology which senses obstacles up to 49 feet away and helps reduce accidents, bumps and scrapes. With Sentera’s TrueNDVI upgrade, the company’s NDVI Single Sensor is installed onto the airframe while the factory-supplied DJI Mavic 3-axis gimbaled camera is left untouched, preserving the full functionality of its 12-megapixel, 4K stock sensor.

“Our customers located in the southern states are already deploying drones upgraded with a Sentera NDVI Single Sensor to capture early growth data and maximize their 2017 yields,” Poulson continued, “We are excited to offer growers yet another True NDVI solution for their farming operations. Growers, agronomists and consultants of any size are finding value in our NDVI Upgrade solutions. The Mavic will help many growers analyze NDVI crop health data for the first time.”

The Sentera NDVI Single Sensor features a high-sensitivity global shutter imager and low-distortion optics for crisp, clear aerial RGB and NIR data collection — directly responsible for creating highly accurate NDVI maps. Sentera’s TrueNDVI solution captures, and then seamlessly flows data into Sentera AgVault software, where additional analytics can be performed, data is catalogued and stored, and ready to leverage immediately and for instant action — at the field edge, or across the country.

Existing Mavic drones can be sent directly to Sentera or a Sentera-authorized reseller for modification. Growers who want to obtain a new Mavic drone with NDVI capabilities can purchase an integrated system directly through Sentera or its resellers.

Learn more or pre-order the upgrade with delivery in March 2017.