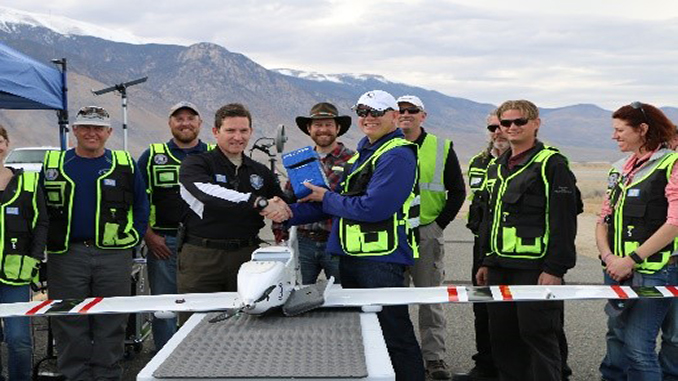 The Nevada Drone Industry set a new long-distance record for aerial package delivery flying a fixed-wing Unmanned Aerial Vehicle (UAV) under beyond line of sight conditions. The backdrop was an urban environment set among the scenic area of Walker Lake with the Nevada-headquartered Drone America flight team flying more than 39 miles to deliver a package to the Hawthorne Industrial Airport in the City of Hawthorne, Nevada, the same town where the Country’s first urban drone delivery was performed in Spring of 2016.

This record-setting beyond line of sight (BLOS) mission was flown under the Nevada UAS Test Site’s FAA Certificate of Authorization (COA) and led by the Nevada Institute for Autonomous Systems, which manages the FAA-designated Nevada UAS Test Site on behalf of the Nevada Governor’s Office of Economic Development (GOED). The Drone America Savant™ unmanned aircraft reached an altitude of 1,500 feet AGL and completed a one hour flight beyond line of sight for a total distance flown of over 39 miles on February 15, 2017. 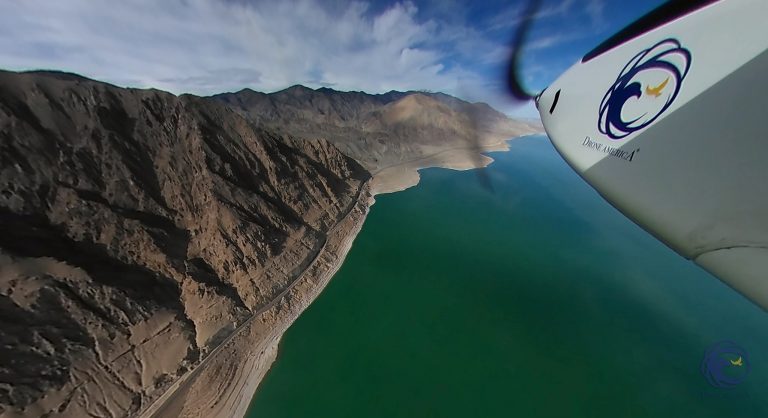 “Nevada’s emerging UAV industry has made tremendous strides since first receiving the FAA UAS Test Site designation a few short years ago, and it is with incredible pride that the State can now declare that our drone effort has broken an industry record by successfully completing the longest ever beyond visual line of sight drone delivery,” said Governor Brian Sandoval. “This achievement is a testament not only to the skill of the team at the Nevada Institute for Autonomous Systems and Drone America, but also the support that has been shown by the entire State of Nevada to support this important initiative. Nevada is changing the future of transportation, and I congratulate all those Nevadans who share in this milestone – this is one for the record books.”

“Statewide support of the drone industry in Nevada has helped to usher in this historic UAV milestone,” said Steve Hill, Director of the Governor’s Office of Economic Development. “With each flight, NIAS makes history, but this most recent achievement is truly one for the ages, and something that we should all be incredibly proud of. I thank the teams at NIAS and Drone America for ensuring that Nevada continues to lead one of the most innovative transportation industries into the future.”

“Today we demonstrated an important milestone, one that can make a positive impact upon humanity. For many years Drone America’s team has been focused on building turnkey solutions that are both commercially viable yet also have a beneficial effect upon the world in which we live. Remote critical package delivery can include such items as medical equipment (AED) and supplies such as vaccines, EpiPens, anti-venom, even a Search, and Rescue survival package. These achievements bring us closer to becoming a self-sustaining, Nevada-based, and American-made corporation that gives back,” said Mike Richards, CEO, and Founder of Drone America.

The Drone America Savant UAS delivered the package to the Hawthorne Industrial Airport and the cargo consisted of emergency supplies in a simulated lost hiker scenario. The package was not dropped from the UAV but instead was meant to be recovered from the hold of the fixed-wing platform upon landing. The UAS operation incorporated multiple ground safety visual observers and an aerial safety observer in a Cessna 206 fixed-wing aircraft flown by AviSight. “We were thrilled to participate in this historic event. The ability to fly these systems BLOS will be critical to the commercialization of this technology for multiple industries,” said Michael Frechette, CEO of AviSight.