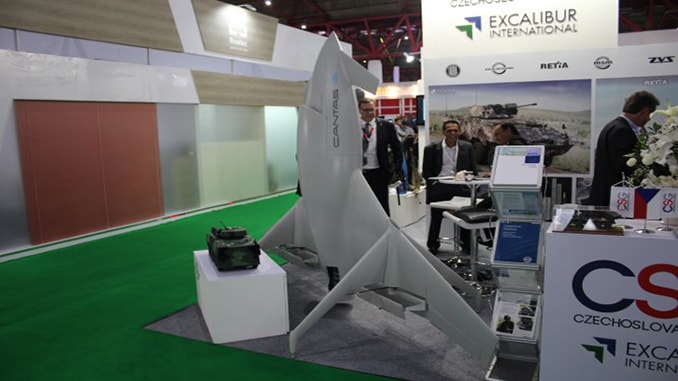 One of the more eye-catching unmanned air vehicles (UAVs) on display at IDEX is the CANTAS from the Czech Republic, making its second international appearance having been debuted at the Indodefence show in Indonesia last November. The UAV, whose name stands for ‘Canard tail-sitter’, is an ingenious design that can take off and land vertically in its CANTAS-A and CANTAS-E forms, using MVVS E100 electric engines buried in each wing to augment the main engine. When on the ground, it rests on four outrigger pylons, which function as aerodynamic fins when in the air.

Developed by New Space Technologies, part of the Excalibur International group, which owns a number of companies in the Czech Republic and the Slovak Republic (Stand CP-410), CANTAS uses a common basic design that can be configured in three different variants. CANTAS-A (Advanced) is powered by a PBS TJ40-G1 jet main engine, aspirated by a low-drag intake on the top of the fuselage and giving it a top speed of 380km/h (236mph). CANTAS-E (Endurance) has an MVVS 58 IRS main engine and a long wingspan, which combine to give an 18-hour endurance, as opposed to 80 minutes for the CANTAS- A. Both versions have hover and vertical take-off/landing capability.

The CANTAS-S (Speed) does not have wing-mounted electric motors and consequently lacks vertical flight capability. However, its shorter wings and sleek fuselage give it a maximum speed of 460km/h (286mph). With an endurance of 40 minutes, this version is primarily intended for light attack and military training duties.

All versions of CANTAS can be flown manually or autonomously.

Each has a detachable nose payload section that can mount a variety of sensors and other systems, up to a maximum of 10kg (22lb). The UAV is equipped with a datalink system for communication and sensor data transfer, with an effective range of 100km (62 miles).

New Space Technologies has designed the three CANTAS versions to fulfil a number of civilian and military roles. In the military arena, the CANTAS-A can perform quick-reaction surveillance and attack duties, while the CANTAS- E is ideal for long-endurance missions such as persistent surveillance and border patrol. The company has built and flown test vehicles of all three versions.