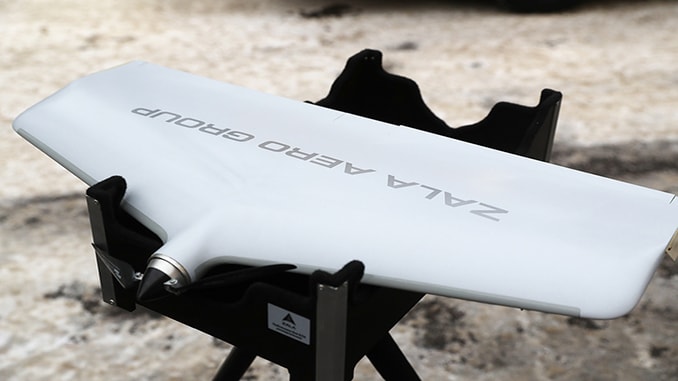 ZALA AERO GROUP, part of the Kalashnikov Group that produces the famous AK-74 assault rifle, has unveiled its newest reconnaissance unmanned aerial vehicle, which has been put into serial production.

The new reconnaissance drone was unveiled at the IDEX-2017  arms show in Abu Dhabi, the spokeswoman said.

“As part of the IDEX-2017 international arms exhibition in Abu Dhabi, the presentation of the Russian aircraft-type unmanned reconnaissance and surveillance system ZALA 421-16E2 was held. The drone has been put into serial production and will soon begin to be supplied to customers,” the spokeswoman said.

The new drone has a takeoff weight of 7.5 kg and a guaranteed flight endurance of four hours with an electrical engine even in harsh weather conditions of minus 40 degrees Celsius.

A daytime camera with a 60-time optical zoom and a thermal imaging device of tenfold optical scope are installed on the drone as the targeted 1.5 kg payload.

“The drone is an all-weather and round-the-clock system. It can transmit video data in complex weather conditions to a distance of no less than 30 km while the radius of its control in harsh weather is no less than 50 km,” the spokeswoman said.

The drone’s inbuilt inertial system, its radar range finder and the bloc of self-diagnostics sensors provide for the unmanned aerial vehicle’s fully autonomous operation from the GPS/GLONASS satellite navigation systems, she added.

“The drone’s first deliveries will be made at the end of this quarter. The new system has been developed amid increased secrecy: the drone’s minimum size allows accomplishing tasks, which earlier required aerial vehicles weighing several times more and based on the use of mechanical or pneumatic catapults,” the spokeswoman said.

Knowledge Base Presented By uAvionix "Performance Based Navigation for Drones"