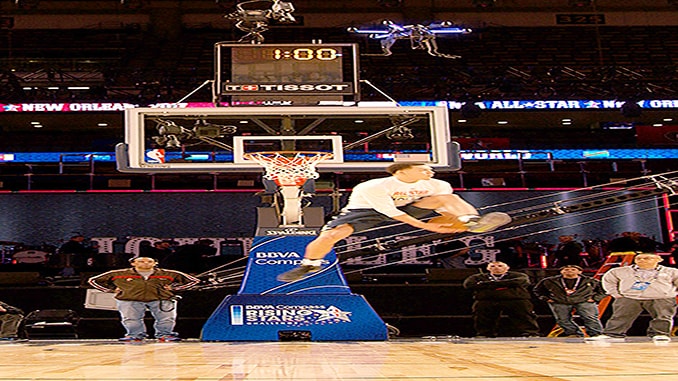 During the 2017 Verizon Slam Dunk Contest, as part of NBA All-Star festivities, NBA forward Aaron Gordon and Intel wowed viewers by collaborating on the first-ever slam dunk with assistance from an unlikely teammate: a drone powered by Intel.

Gordon’s performance featured a never-before-seen assist from a drone, making it the most highly-technical dunk ever attempted during the NBA slam dunk contest. His showmanship was on display in full force with the inclusion of advanced drone technology powered by Intel.

“I’ve been thinking about what I wanted to do for this year’s contest pretty much since the contest ended last year,” Gordon said. “I wanted to incorporate technology and do something creative and unique, which is why I was so excited to partner with Intel. Originality for me is key. I wanted to avoid doing anything gimmicky and get back to the creativity of the contest. And what better way to do that than to surprise the crowd with a drone powered by Intel?”

Born and raised in Silicon Valley, technology is embedded in Gordon’s background. His mother, Shelly Davis Gordon, is an Intel employee who worked in the semiconductor industry for 35 years.

“When Aaron Gordon approached Intel with the idea to complete the first-ever drone-assisted slam dunk, we couldn’t wait to support him in his quest,” said Anil Nanduri, vice president of Intel’s Drone Segment. “Intel is leading and committed to bringing new capabilities and innovations to the drone ecosystem, so obviously our team saw this as an opportunity to do just that. Our goal as a brand is to use technology to create amazing experiences and I can think of no better way to prove that than by working with Aaron on this historic dunk attempt.”

The drone powered by Intel that starred in the 2017 Verizon Slam Dunk is a fully-redundant helicopter. It is designed with safety in mind and is resistant to any single point of failure. The drone has a flight time as long as 26 minutes, weighs just less than 11 pounds and can carry a payload of up to 4.4 pounds.

For more information on what else Intel is doing in the drone space, visit “The Airborne Revolution” page on Intel.com.