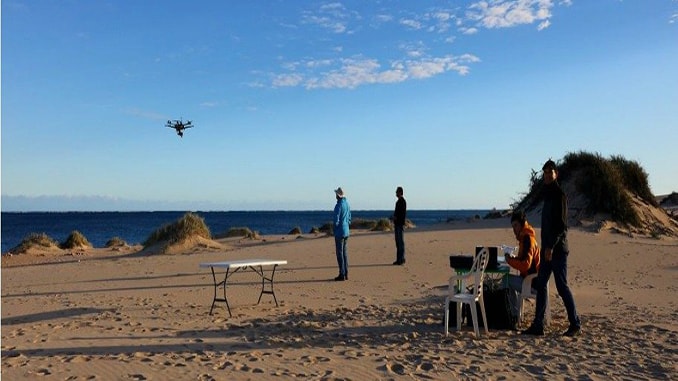 The combination of drones and a highly specialized camera are allowing researchers to explore a West Australian reef in more detail than ever before.

“Normal cameras record images in three bands of the visible spectrum – red, green, and blue – mixing those bands together to create colors as humans see them,” said project leader Felipe Gonzalez, from the Queensland University of Technology (QUT) in Australia.

“By comparison, the hyperspectral camera captures 270 bands in the visible and near-infrared portions of the spectrum, providing far more detail than the human eye can see.”

Drones, or Unmanned Aerial Vehicles (UAVs), are now capable of carrying small versions of these incredible cameras, which were once so large and expensive only satellites and planes could use them.

Ningaloo Reef in Western Australia is where the QUT team has taken the footage, in what they describe as a data-gathering mission to help inform future research.

The area is a heritage-listed site, and Australia’s largest fringing coral reef.

It’s also the only large reef in the world positioned so close to a landmass  – although, unlike the Great Barrier Reef, it’s not under pressure from the human population.

This makes it a unique habitat that researchers are keen on gaining a better understanding of.

But the QUT team is also using its UAV system to monitor environmental issues across Australia, including diseases in wheat crops and vineyards.

The researchers say the system will be a huge addition to environmental monitoring in the future.

“Large-scale, high-altitude surveys of the Ningaloo and Great Barrier reefs may lack the resolution necessary to identify individual corals, so this is the niche for low-altitude UAV surveys.”

“This provides us with a spatial resolution of approximately 15 centimeters (5.9 inches) per pixel – more than enough detail to detect and monitor individual coral species, ” said another member of the team, research engineer Dmitry Bratanov from QUT.

“The really special thing about the hyperspectral camera is that it takes images across 270 slices of the spectrum. This huge amount of information allows for the classification of coral species, san, and algae based on their unique spectral signatures.”

Every object gives off a unique hyperspectral signature, kind of like a human fingerprint.

A diseased object, like a coral or tree, gives off a different signature than the equivalent healthy object.

The QUT team is now creating a database of these unique signatures – allowing the quick and easy identification of specific species and health.

“This database will become increasingly valuable to all environmental researchers into the future.”

The researchers have yet to publish their results, but this should happen as the data come through in the next few months.

“Our data would make for a fascinating comparison between a remote pristine reef in Western Australia and a reef system under pressure from human activities along the Queensland coast,” says Gonzalez.

“It’s exciting to be at the forefront of a new approach to monitoring and managing the Australian environment.”