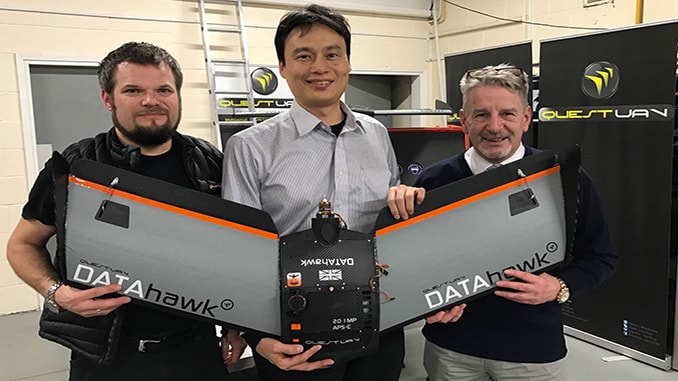 In January 2017, Terra Drone Corporation signed a strategic alliance with British fixed-wing drone developer QuestUAV. In the future Terra Drone will conduct surveying services using QuestUAV’s fixed-wing aircraft, sales of the airframe itself and joint development of new aircraft. The QuestUAV products enable photogrammetric surveying with higher precision than competitors’ aircraft, and they can be used for large-scale development such as dams and mega solar.

“We have adopted QuestUAV product as a service, and have concluded a strategic alliance including aircraft sales and development in Japan. Compared to competitive fixed-wing aircraft, the performance of the on-board camera and the stability of the aircraft are improved, enabling more accurate surveying. In addition to surveying service offering and airframe sales, we will continue to develop jointly for further improvement of airframes.”

Features of a QuestUAV aircraft

Terra Drone is part of the Terra Group Companies who manufacture and sell Rickshaws, Electric Motorcycles and Tricycles in Asia, whilst boasting an 85% export sales rate – Terra Motors Co., Ltd sells over 30,000 a year.

3 Examples Of Why Modular UAS Payloads Are The Future