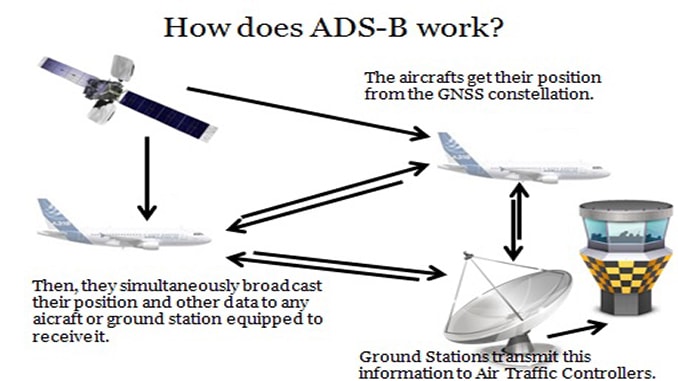 The Case for Low Power ADS-B for Drones

Let’s just start with a few numbers and some back of the envelope math:

Just to iterate on that theme a bit with regards to reaction time:

I’m guessing that if you’re reading this post, you probably have an idea of what Automatic Dependent Surveillance –  Broadcast (ADS-B) is.  But just to give a very brief description – ADS-B is an internationally standardized aviation technology that is mandatorily being installed in airplanes and helicopters worldwide.  Very simply, the ADS-B avionics onboard the aircraft announces its own identification, position, altitude, and direction – for all the world to hear.  Who is listening?  Air Traffic Control (ATC) for one – it’s a significant improvement over legacy radar technology.  But who else can hear? – any other airplane within tens to hundreds of miles around – and all those little airplane icons can be plotted on a map in their cockpit or on their ipad or other mobile devices.  It looks like this: 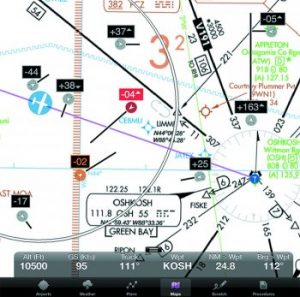 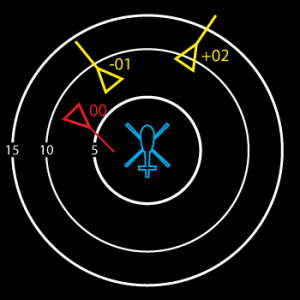 “WOW – This sounds perfect for drones!” you might say.    “If all the drones have ADS-B, and all the airplanes have ADS-B – then everyone can see each other and stay out of each other’s way!”

Well, it turns out that the concept is a pretty great, but it’s not a perfect solution.  In fact, if implemented poorly – it could be a very bad solution. We at uAvionix want to make sure it gets implemented the right way.  In fact, we are passionate in our belief that this technology will save lives.

Let’s quickly list the arguments against ADS-B for drones, and we’ll dig into the details of the last one a bit – which deals with the subject matter in the title of this post.

“The technology is too big for drones!”

Not anymore.  Just browse our product listings and you’ll see we have products that range from 5 grams to 70 grams.  We have some products even tinier that we can’t sell for the reasons described later.

“The technology is too expensive for drones!”

This is a function of supply and demand.  Prices can and will come down with volume.

“Not every airplane/helicopter has to have ADS-B onboard, so it’s not a 100% solution”.

True statement, but the majority will, and with dropping prices – more will voluntarily equip.  Turns out we’re working that angle as well – but that’s another blog post for another day.

“LTE/5G will be a better solution for tracking drones.”

There is no doubt that these technologies will have a critical role in connecting the future fleet of drones – but defining a standard that the whole drone industry will adopt, and more importantly somehow driving that visibility into the manned aircraft cockpit will take many years. 1,800 pilot drone sightings last year.  We need something now.

“ATC doesn’t want to see all those drones on their screens!”

This one gets a little technical – but those displays have the capability to filter out things they don’t want to see – like really low-altitude drones in uncontrolled airspace.  They can do this today.  And you can bet they DO want to see drones on an approach path to a runway.

Those are actually the trivial arguments – this last one is the more complex one:

“If all the drones that are predicted broadcast ADS-B – there would be so many ADS-B messages bouncing around the skies that it would flood the airwaves and the whole system would come crashing down and be unreliable.”

This is the one that scares the FAA and other regulatory bodies – and it’s a true statement.  But there are a lot of assumptions in that statement that can be mitigated with some very practical measures.  Let’s break it down:

“If all the drones…”

I haven’t heard anyone advocating for “all the drones” to broadcast ADS-B.  The practical measure here is to limit ADS-B to only drone operations that are pretty risky – like those flying beyond visual line of sight (BVLOS), or in controlled airspace for example.   If following this rule, NONE of the drone operations conducted under Part 107 would require ADS-B equipment.

The numbers being used here are pulled from a recently published study that included a simulation that placed 14,000 small drones all under 500 feet AGL simultaneously within a 32-nautical mile diameter.   That is a LOT of drones – and we don’t know when or if we might ever get there – but we do know it’s not this year or next – maybe not for 10 years or more.  In the meantime, 1.2 million drones were sold in the U.S. in 2016.  We have time to implement a safety measure now, and adjust as we go along.

“…it would flood the airwaves…”

Here’s the good stuff.  That same study suggests that there is a nominal transmission power output between 0.01 and 0.1 Watts that when coupled with limited drone traffic densities can result in a compatible operation with the system as a whole.  Whoa – that got technical fast – what that statement means is there is a REALLY low power output for ADS-B transmissions that if implemented on drones won’t “flood the airwaves” and crash the system.  By the way, those power ranges mentioned would give other aircraft the ability to see the drone from 1-5 miles away on their cockpit screens.  And if you’re wondering – yes – it’s technically possible to build one that small.  Uavionix has  done it – and here it is: 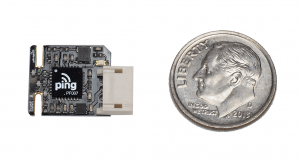 “HOORAY!  Let’s just do that!”    If only …. the problem is that the technical standards that were written for ADS-B many years ago didn’t have drones in mind, and therefore the power ranges specified in those standards range from 7 Watts to 350 Watts, the upper end providing visibility for hundreds of miles – necessary for big aircraft at high altitudes being watched by ATC.  Therefore – it’s not legal to transmit at low power settings that would prevent the very thing everyone fears.

So here we are.  A technical solution is among us that increases safety today.  It has been confirmed by smart people at a credible source which happens to have an advisory role to the FAA.  But while it is legal to broadcast ADS-B from drones today from 7-350 Watts – contributing to “flooding the airwaves,” it’s literally illegal to broadcast at a power setting that still provides the safety margins needed, but at a comparatively minuscule power setting that preserves the integrity of the whole system.

We need our regulators to identify this as an opportunity for a quick standard that can be developed, released, and required on those most risky of drone operations.

If you want to read that really technical study by some really smart people at a credible source (MITRE Corporation) – you can find it at www.mitre.org.  It’s called “ADS-B Surveillance System Performance with Small UAS at Low Altitudes”