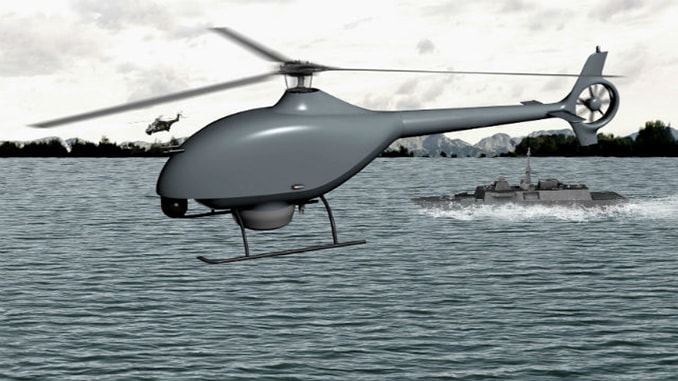 Airbus Helicopters expects to conduct the maiden flight of its recently revealed VSR700 vertical take-off and landing (VTOL) unmanned aerial vehicle (UAV) before the end of the year, the company’s CEO, Guillaume Faury, said on 27 January.

Speaking at a press briefing, Faury said that as the first flight of the platforms the company are developing with French naval shipbuilder DCNS is due to take place in the coming months, military qualification should follow in 2019.

Airbus Helicopters revealed the VSR700 VTOL UAV in October 2016, which it said is being developed in response to the French Navy’s Système de Drones Aériens de la Marine (SDAM) requirement. As noted at the time, it is essentially a Hélicoptères Guimbal Cabri G2 light helicopter that has been fitted with autonomous technologies that include a sense-and-avoid capability.

With Airbus Helicopters designing the platform, designated the VSR700, DCNS will be responsible for its integration into ship-based operations. This includes the development and validation of the mission system, as well as the payloads and mission datalinks.

In its size and performance specifications, the VSR700 is in the class of the Northrop Grumman MQ-8B Fire Scout, as fielded by the US Navy. It is probable that whichever platform the French Navy selects to fulfil its SDAM requirement will be used in a similar role, taking on missions such as over-the-horizon intelligence, surveillance, and reconnaissance (ISR) communications relay, and even unmanned strike.