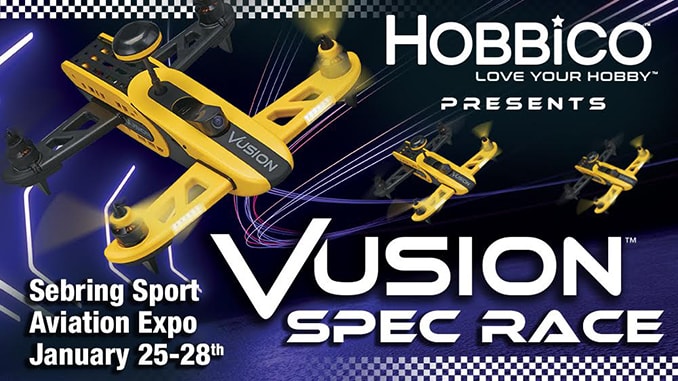 MultiGP is proud to announce that Hobbico, one of the nation’s leading hobby companies, will be holding the Hobbico Vusion Race at the Sebring U.S. Sport Aviation Expo in Sebring, Florida, January 25th – 28th. This event features a $5,000 prize purse, sponsored by Hobbico, that will put the top drone racers against each other using the new Hobbico RISE Vusion Extreme FPV Race Pack, an “all-in’one” drone racing package, being released by Hobbico.

This MultiGP Drone Racing sanction event will put the fastest FPV pilots around competing against each other on a completely level playing field. This will be a true Spec Class event; all the competing pilots will be using the Hobbico RISE Vusion Extreme FPV Race Pack. With all of the pilots flying the same equipment, this will be a match of pilots’ skill, not craft superiority! The Hobbico Vusion Race is just part of the drone racing festivities that will be taking place at the Sebring U.S. Sport Aviation Expo.

Also taking place at the Sebring U.S. Sport Aviation Expo is the Sebring Drone Race 2017. This must-attend event will be hosted by Urban Drones, sanctioned by MultiGP, directed by Joe Scully, broadcast by FPVLive.tv, and raced by the top pilots in the world! The grand prize is $10,000 and total cash and prize purse is estimated at over $20,000! This event is attracting the fastest FPV pilots in the world, like the current MultiGP 2016 National Champion Shaun “NYTFURY” Taylor. Drone pilots from as far away as South Africa will be in attendance to entertain and enthrall the spectators, both at the event and watching the FPVLive.tv live stream.
These pilots will be flying over and around the exhilarated spectators, who will be sitting alongside the pilots in a unique fully-enclosed viewing area in the center of the race course.This area will also contain monitors, large screen TVs, and a huge projection screen to watch the pilots’ video feed. This one of a kind spectator area will put those that are present “in” the action! For those not in attendance, FPVLive.tv will be live streaming the entire event.
For more information visit multigp.com
Prev post