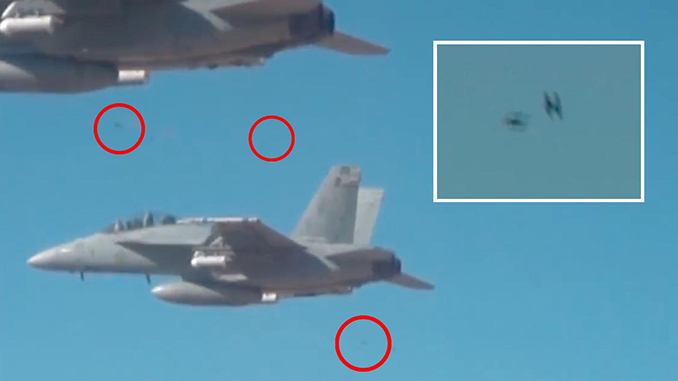 In one of the largest successful demonstrations of swarming micro-drones, over 100 Perdix UAVs screamed over the US Naval Air Systems Command’s testing grounds at China Lake, California last October.

Three F/A-18 Super Hornets launched 103 Perdix UAVs which demonstrated collective decision-making, self healing and adaptive formation flying, according to a 9 January public release from the US Defense Department. Perdix are not pre-programmed and rather share a distributed brain which allows them to adapt their formation, according to the DOD. The UAVs transmit information within the swarms and to command stations.

While the UAV may change its direction, the Perdix operator commands the UAV run a certain mission and could predict the swarming behavior.

The US Defense Department’s secretive Strategic Capabilities keeps mum on most of its programmes, but has not been shy about showing off the UAV. During a roundtable last summer, SCO director William Roper passed around the palm-sized Perdix with reporters. Its etymology traces back to the Greek word for “partridge” and the myth of a jealous Daedalus throwing his innovative nephew, Perdix, from a tower. Just before he met his death, Perdix was saved by the goddess Athena who turned him into a partridge.

Developed with the Massachusetts Institute of Technology’s Lincoln Laboratory, Perdix is an expendable UAV which springs out of a fighter jet’s chaff dispenser and flies low to capture video. The forward and rear wings fold to fit inside the flare canister, with a propeller to push the vehicle forward. US Air Force F-16s dropped Perdix UAVs in 2014 and the following year 90 Perdix missions were completed during exercise Northern Edge in Alaska. Perdix can also be launched from the ground and sea.

“A fighter is a fast moving thing. It’s not meant to fly low and do reconnaissance, especially if you’re trying to look at a difficult angle if something’s hidden,” SCO director William Roper told reporters last summer. “So it makes a lot of sense that if they could deploy something that could find and loiter and radio back that they could be a mothership to carry in Perdix.”

The UAV could have numerous applications, though the SCO has only mentioned Perdix’s ability to fly a low-altitude intelligence, surveillance and reconnaissance mission. The UAVs launched in October were the sixth iteration of Perdix, flying in 10°C (50°F) temperatures at Mach 0.6.