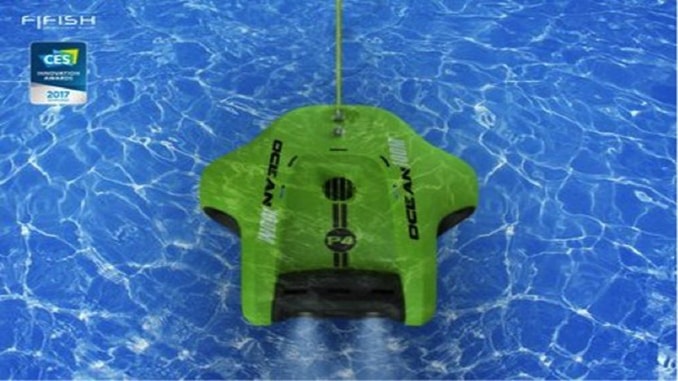 FiFish, Qiyuan Technology ‘s underwater drone, has won the 2017 innovation award and has become the only winner among its kind. FiFish is an important sponsor project from Taihuoniao technology.

FiFish is an underwater drone for the consumer market, It fulfills the demands of customers with desires of underwater exploration, and provides a brand new way for photographers, diving and water sports lovers, and underwater explorers.

As a convention recognized internationally, CES’s awards are considered as ” the Olympic awards in consumer electronic industry”. After last year’s debut, FiFish has another “intimate contact” with this industry this year.

The innovation awarding FiFish caught the eyes of leaders in the many fields of industries. Dr. Weicheng Cui, the previous deputy chief designer who has designed one of the world’s deepest diving submersible “Jiao Long”, gave his full affirmation and praise upon FiFish’s design concepts and photographing ability. The first Chinese Hasselblad portrait and marine photographer, Mo Xie, has always paid close attention to the FiFish latest news, from the concept design all the way to product launching.

Nowadays, there are countless drones that can fly in the sky, and yet only few can go under the water.

“71% of the earth is covered by an ocean but only less than 5% of which has been explored. So far 12 people have walked on the moon; around 500 people have visited outer space, but there are only 3 people has been to the deepest ocean at Mariana Trench. The underwater world is still mysterious and it is time for us to rediscover the ocean”, said Chong Zhang, the founder, and CEO of Qiyuan Technology.

In July of 2015, the team started the consumer underwater drone project, with the determination of reshaping the traditional ROV industry and the passion of exploring the ocean. And that is the origin of today’s Qiyuan Technology and the FiFish.

Fifish is the first attempt to bring military and industrial underwater drone into the consumer market; it is also the inspiration for people to explore the mysterious underwater world. It created a new market demand.

Qiyuan Technology focuses on the key technology development and breakthrough for an underwater drone. We have our own core technologies and algorithms, including state of art component design, robot operating system, video/data collection system, cloud processing and terminal application etc. FiFish equipped with the company’s independently researched and developed core components: underwater propeller system, camera and lighting system, control system, underwater communication system and real-time feedback system. It can stream the real-time high resolution video under the water. At the CES Convention, Qiyuan Technology has been working with Xiaomi VR team to provide VR devices for guests to experience mysterious underwater world, and immerse into the incomparable beauty of the deep sea.

At this year’s CES, Fifish gets all the attention from the variety of industries and potential partners. Zhang Chong, Founder and CEO of Qiyuan Technology, mentioned that the launch of Fifish has started a brand new way for personal underwater exploration, and lowered down the barrier for ocean explore. At the same time, the innovative technology has brought revolutionary changes to the industry’s application and expanding. We are working actively to bring more well-developed technology from consumer market to the marine fields, and establishing a partnership with leading organizations all over the world on the key technologies for the marine field. We are convinced that we can bring meaningful revolutions for the world and put its application into wide uses.