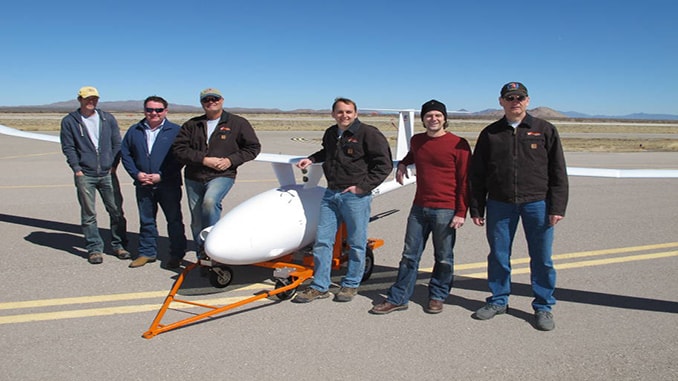 The US Defense Advanced Research Projects Agency (DARPA) announced on 4 January a world-record breaking endurance flight for a diesel-powered unmanned aerial vehicle (UAV), with a nearly 56-hour sortie flown by a craft built by Vanilla Aircraft of Falls Church, Virginia.

The flight of aircraft VA001 began on 30 November 2016 at New Mexico State University’s Unmanned Air Systems Flight Test Center near Las Cruces International Airport, and saw the UAV fly at an altitude of between 6,500 ft and 7,500 ft and averaging 57 kt before landing on the afternoon of 2 December.

A representative from the National Aeronautic Association – the organization that verifies and tracks flight-related world records – certified the flight as achieving the world duration record for combustion-powered UAVs in the 50-500 kg subclass (FAI Class U-1.c Group 1). Moreover, the flight was the fourth-longest for any unmanned aircraft and the 11th-longest for an aircraft of any type (manned or unmanned, solar or fuel-powered).

According to DARPA, the event was actually terminated several days ahead of schedule due to incoming bad weather conditions, and VA001 landed with more than half a tank of fuel still onboard. It added that the UAV is capable of setting additional records for powered flight in its weight and power class, and could ultimately offer important new capabilities to ground forces and others.

As noted by the agency, current UAV designs offer relatively limited range and flight endurance, and their need for frequent refueling, specialized launch and recovery equipment, and regular maintenance often limit them to flying from fixed bases close to the front lines. Vanilla’s propeller-driven VA001 is designed to carry a 30 lb (13.6 kg) payload at 15,000 ft for up to 10 days without refueling.