At a mid-Atlantic U.S. Army training base this past December, it is night, and the weather is chilly and damp. An “aggressor” team, part of an urban combat exercise, drives stealthily to a new ambush location. They exit their vehicles and starting looking for positions from which to initiate an assault on “friendly” forces nearby. 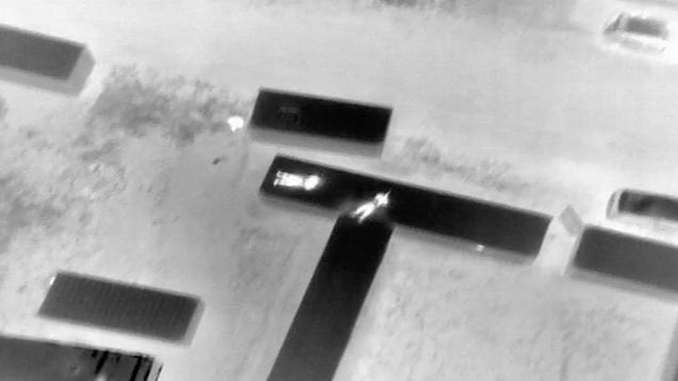 Unknown to the aggressors, their arrival is being projected in real time on the situation video wall in the “friendly forces” command center. The vehicle types and enemy force size have already been calculated and a counter-assault team has been prepared and deployed. To locate the intruders, they are told: “look up!” A light in the sky starts to flash directly above the ambush location. 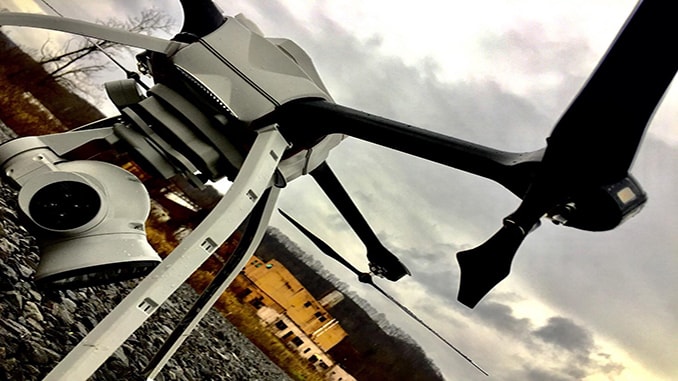 The Unmanned Experts-Flown Aeryon SkyRanger During Preflight. It Provided
Live Imagery In Spite of 34 Degree Weather And 30 Knot Wind Gusts

What was the good guys’ advantage? A commercial UAV (Unmanned Aerial Vehicle) coupled with cutting edge AI (Artificial Intelligence) software. Hovering steadily above the exercise in spite of 30 knot wind gusts, an Aeryon SkyRanger UAV, piloted by Unmanned Experts, had been streaming a real-time infrared image to the command center. At the center, the imagery was immediately processed by an AI software application from Cogniac to identify and count the vehicles and individuals associated with them and calculate a threat estimate.

The event centered on a contract from the U.S. Army  Systems Adaptive Red Team /Technical Support and Operational Analysis (ART/TSOA) given to San Jose-based Cogniac, a provider of enterprise-level, AI-grade software that provides custom, real-time analysis of video and image data. Cogniac’s mission was to demonstrate the ability of their AI application to provide fast, reliable, and actionable analysis of real-time imagery in a field command environment. To provide the imagery source, Cogniac contracted with Unmanned Experts, a Denver-based UAV services provider with a wide range of project experience, from bridge inspections to FAA drone defense tests, to provide the SkyRanger sUAS and camera and to fly the surveillance missions.

Cogniac called the project a success. “This is the first time we have combined the technologies of ‘mil-spec’ level UAV flying from Unmanned Experts with Cogniac’s real time AI image processing,” said Ilia Rosenberg, VP Programs. “In just two days of preparation, we were flying, streaming electro-optical and thermal images, processing video, and generating detections. The live data feed quickly became the ‘persistent eyes’ of the mission command. By day, the Cogniac AI application was successfully classifying the forces by the color and types of uniforms; by night, the IR feed was locating vehicles and individuals. We see this technology becoming a powerful addition to the Army’s ISR capabilities.”

For Unmanned Experts, this project was not just another day at the office: UAV projects never are. “This drone industry keeps revealing exciting new frontiers,” said Dave Prall, VP Special Projects and pilot of the surveillance UAV. “Drone technology today is flexible and adaptable, so when we got the invitation from Cogniac to participate in this project, we grabbed a workhorse commercial UAV off the shelf, tested the data links, and jumped into the exercise. We broke new ground in several areas: this was our first night-authorized mission; the first time we’ve directly supported a live military exercise, and the first time we’ve fed live imagery to a powerful, real-time software analysis tool.”

One incident in the exercise stood out for Dave: “Our UAV was tracking a friendly force moving to a new location. In the image feed, the software identified two snipers positioned on a nearby roof. The command center redirected them to avoid an ambush. That was a powerful demonstration of the game-changing potential of the technology.”

Bill Kish, the former CTO and founder of Ruckus Wireless and now CEO of Cogniac, says: “As a second-time participant in the Unique Mission Cell tests we are very proud of the progress that we have achieved with our industrial partners.  This time around our joint capability was stood up and demonstrated in conditions that simulated a real war zone environment. Cogniac adaptive AI technology coupled with the UMEX UAV persistent surveillance capability is a potent combination applicable to a multitude of applications within defense, homeland security, and broader industry. These technologies are on a dramatic trajectory that will significantly increase operational effectiveness while reducing costs.”

For Cogniac and Unmanned Experts, the project provided confirmation that a small-footprint, versatile quadcopter UAV system, in combination with a portable but powerful AI software package, can provide a life-saving umbrella for small operating units in hostile environments. Both teams look forward to working with the Army to continue exploring how the COGNIAC/UMEX system can further impact its battlefield technology.