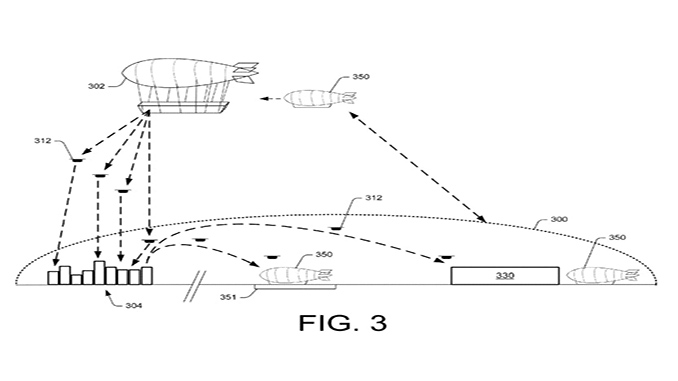 Amazon has been awarded a patent for a giant flying warehouse that acts as a launchpad for drones to deliver items within minutes.

The U.S. e-commerce giant described plans for an “airborne fulfillment center” (AFC) such as an airship or blimp that would float at an altitude of around 45,000. The airship will be stocked with lots of products.

U.S. patent 9,305,280 was filed by Amazon Technologies Inc. on behalf of inventors Paul William Berg, Scott Isaacs, and Kelsey Lynn Blodgett all the way back in December of 2014. It was granted on April 5, but has pretty much flown under the radar until now, despite the company’s well-publicized efforts to get Prime Air delivery drones off the ground. The patent has detailed diagrams as to how the process would work, and so far it looks completely wild. The aerial fulfillment centers would basically be massive, permanently-floating warehouses stocked with tons of Amazon merchandise, and staffed by workers carried to and from work in flying “shuttles”.

When a customer places an order, a drone or unmanned aerial vehicles (UAV) will fly down and deliver the package. According to the patent’s abstract, the “AFC” would use unmanned aerial vehicles to deliver products to customers. But unlike the Prime Air drones, the AFC’s drones would basically be guided package-systems, using gravity to propel them downwards at an angle using hardly any energy, adjusting course with just minor aerodynamic shifts. Here’s what one of the delivery drones would look like.

The drones would be able to communicate with each other via a mesh network to give information such as weather and route. UAVs could also recharge on the airship. Amazon’s filing explains that the blimp would remain in the air and be refueled and replenished using a shuttle. This could be a smaller aircraft capable of docking onto the AFC and unloading products as well as fuel. The whole system seems pretty awesome, but it’s a long way from being realistic. If this plan saw the light of day, Amazon would likely need regulatory approval from aviation authorities which could be complex.