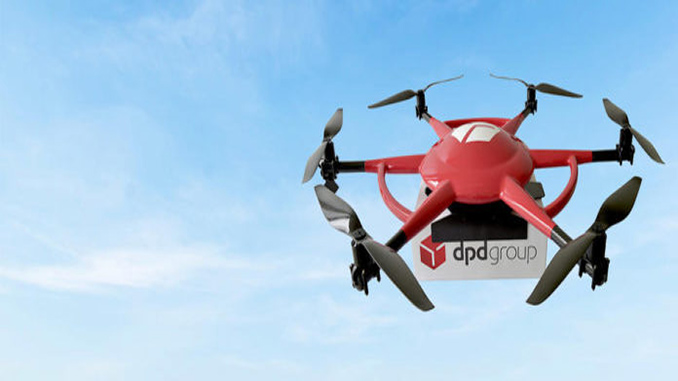 Following two years of tests, DPDgroup has received authorisation from the General Directorate for Civil Aviation to deliver parcels using drones on a regular 15km route.

Once a week, the DPDgroup drone travels between Saint-Maximin-La-Sainte-Beaume and Pourrières, in south of France (Provence region). The route makes it possible to delivery items to a cut-off incubator of companies including a dozen start-ups specialized in technology. Their parcels now delivered by Chronopost and DPD France will be sent by drone from the Pick-up point in Saint-Maximin.

For both the departure and arrival of the drone, a delivery terminal is used to secure the parcel loading phases, from take-off to landing and placement of the parcel. The terminal features a structure protecting access to the drone during landing and take-off phases, an automated carriage system for transporting the parcel, and an electronics system devoted to the safety of handling operations around the drone.

DPDgroup began conducting tests to develop the drone in June 2014, in partnership with Atechsys, an SME based in south of France. After numerous tests and over 600 hours of flight time, the DPDgroup drone demonstrated, in September 2015, its ability to fly in complete autonomy as it transported a parcel weighing 1.5kg over 14km.

The first commercial deployment represents a new step in the program being led by DPDgroup. After the testing phase, the experimentation phase on the regular route can now begin.