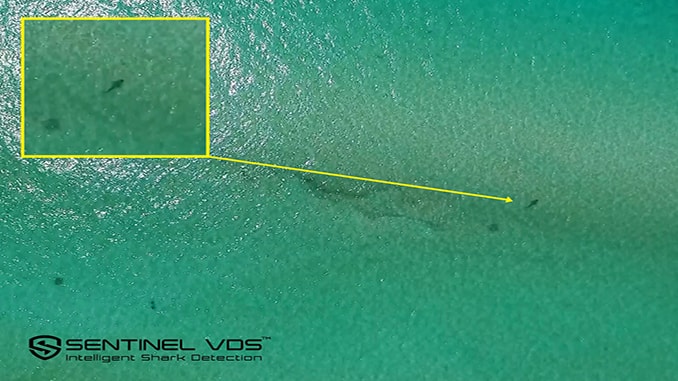 The project was launched earlier this year after Directors from Astron realized the positive impact that drones, alongside intelligent detection software, could have on the shark attack problem currently being experienced in Western Australia and NSW.

“The use of drones and the development of remote sensing analytics is one of our key services at Astron, so it’s with great optimism that we have launched the Sentinel VDS platform. We think that Sentinel VDS will allow the implementation of a shark attack mitigation approach which doesn’t unnecessarily cull sharks and impact other species” explains Astron’s Technical Director Mr. Julian Kruger.

In early October 2016, the Sentinel VDS  team traveled to Shark Bay in order to achieve a significant milestone in the development of the platform.

“Shark Bay seemed an obvious choice as our first trial site with its prevalence of tiger sharks and diversity of habitat and substrate,” said Mr. Kruger.

The field campaign allowed the Sentinel VDS  team to obtain a substantial volume of verified shark imagery which was then used as a training set to improve upon the species detection algorithm.

On successful completion of this first stage trial Mr. Kruger noted that a substantial milestone was achieved.

“Our ambition with the Shark Bay field trial was to capture enough data to allow us to firstly confirm, and secondly improve upon, the veracity of the detection software. To have successfully captured the data and then see it produce a positive and persistent detection result was a tremendous outcome for us.”

In addition to improving upon the detection software, the team was able to successfully trial a number of operational parameters for the UAV platform, including flights at varying altitudes, speeds, and environmental conditions.

“These results will allow us to fine-tune the operational requirements for the UAV platform and optimize the ability of Sentinel VDS to detect sharks, process the imagery and alert the operator within the required operational timeframe.”

“For a project like this, the operational parameters are equally important as having the detection software in place, so to be able to validate our approach to both components under a single field trial was a fantastic outcome.” explains Mr. Kruger.

Having confirmed the concept as a valid approach towards shark detection, Astron and C4D Intel will now continue to pursue the next stages of development for Sentinel VDS.

“State government authorities have granted us a standing license arrangement through to July 2017 that allows us to operate our Sentinel VDS platform in a number designated areas along the Western Australia coast.”

“Our ambition now is to bed down the development gains we have achieved during the Shark Bay campaign and start moving from development trials to operational trials. At this stage, we have our focus on being able to achieve that by the start of Q2 2017.”

The Sentinel VDS team will also be trying to capture any additional shark footage they can over the next 6 months.

“All extra data from here will help us confirm and improve upon our existing technique,” said Mr. Kruger.

“Machine learning is a data intensive approach, so the more training data we can feed it the better it gets.”

For more information about the Sentinel VDs project visit www.sentinelvds.com.au