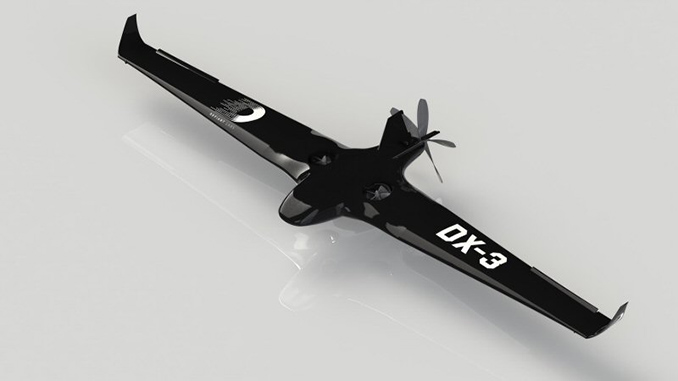 Canada’s drone leaders, The Sky Guys Ltd, announced today their new technology division, Defiant Labs with the unveiling of their drone, the DX-3. Set to disrupt all previous industry standards, the DX-3 has vertical take-off and landing and fixed wing flight capability.

“The DX-3 will fundamentally change the drone industry,” said Adam Sax, CEO and Founder of The Sky Guys, and owner of Defiant Labs, “Until now, drones had limited endurance, range, required runways, line of sight operation, data processing lagged and most drones needed ideal climate conditions to perform or be deployed.”

“This is Canadian technology, it is world-leading technology and we will design, manufacture and produce the DX-3 in Canada. The DX-3 is robust, capable for operation and deployment in challenging conditions like rain, desert or arctic. It’s only fitting that a Canadian company would make a drone that can endure and withstand environmental extremes.”

“In addition to the hardware technology innovations, the DX-3 is leading in data analytics, capable of live data processing,” noted, Sax. “Not only do we have advanced imaging processing for industrial inspections and security applications, the data processing features predictive analytics forecasting. We are excited to have partnered with NVIDIA to build proprietary solutions based on their learning algorithms. Because the basic platform is AI-enabled the patterns and possibilities are endless.”

Flight testing and pre-orders of DX-3 will commence mid-2017.

The newly unveiled DX-3 drone is specially designed to monitor and inspect remote long range infrastructure, be it for oil and gas pipelines, power transmission lines or disaster relief and security.

DX-3 is the only drone to offer the following:

Turkey has Developed its First Armed UAV The Bayraktar TB2