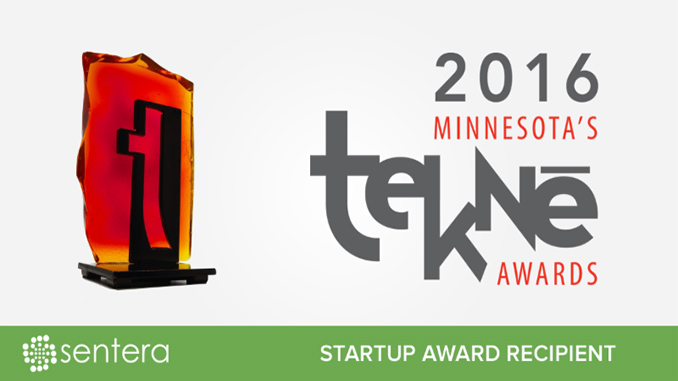 The Minnesota High Tech Association (MHTA) recently recognized Sentera as the 2016 Tekne Startup Award recipient. The MHTA Tekne Awards honor companies and individuals who play a significant role in developing new technologies that positively impact the lives and futures of people living around the world.

Sentera is a remote sensing company specializing in unmanned aircraft, high-precision sensors and data analysis software. While active in most industries where drones are used, Sentera plays an important role in solving world hunger through precision-sensing in agriculture.
Sentera sensors fly over farm fields, measuring things like nitrogen levels or moisture levels in soil or identifying stressed areas. Data are managed at the field edge through Sentera software. The result is better yields using fewer inputs.
Sentera is active in mobile communications, as well. Sentera inspection drones provide high-resolution images of a tower while the operator stays safely on the ground.
With customers on five continents and in over 30 countries, Sentera’s products are truly making a global impact.
“We are so honored to be recognized by the MHTA!” said Eric Taipale, Sentera’s CEO. “We believe we’re solving real problems and love the fact that we get to make a difference in how our customers do business. It is an incredibly rewarding endeavor and the entire team contributes to our success.”
Tekne Awards were presented to 14 of Minnesota’s most influential companies and recognized innovations in education technology, energy, healthcare, software, workforce development, manufacturing, agriculture, cyber security, and information technology.
“Minnesota continues to be a national leader in technology and science, and this year’s Tekne Award recipients are clear evidence of that,” said Margaret Anderson Kelliher, president and CEO of MHTA. “We are honored to recognize Sentera for their innovations and achievements.”
For more information, visit www.sentera.com.
Prev post