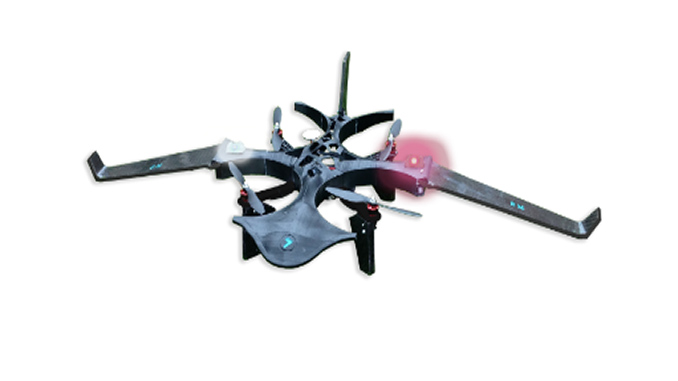 Tech startup SlidX, based out of Montreal, has only been on the scene since 2015, but it’s been a pretty busy year! Just a few months ago, we told you about their 3D printed drone, the Gyro-X8 KAYRYS, which can offer medical supplies on the scene of an accident or major disaster. The second version of the KAYRYS features a fully 3D printed cover. The KAYRYS quadrocopter’s purpose sounds a lot like what Mouser Electronics and Easy Aerial Inc. are trying to accomplish with their cloud-based drone platform GlobalARC for Project First Responders. Now, SlidX is announcing the launch of their new surveillance and security drone, the Black Manta Air.

The vertical take-off and landing aircraft (VTOL) benefits from drone and delta wing technology. When developing the KAYRYS, SlidX partnered with another Montreal company, Lézar3D, to have the 3D printing completed for the drone. 3D printing was also used in making the Black Manta, as SlidX tells us: about 65% of the vehicle is 3D printed, and only the frame is carbon. The fully customizable drone weighs less than 5 lbs., making it perfect for stealth missions; it’s like a super spy drone! That is SlidX’s vision for this smaller, more covert model: they intend for it to be used mainly for safety and monitoring tasks.

The SlidX Black Manta adapts perfectly for civil and defense security issues, with its tactical laser sight, motion detector, spotlight, and both thermal and night vision. Police and fire departments could coordinate drones to go into areas like Gatlinburg and conduct flyovers, to see if any people or animals are trapped inside a building, see where the flames are hottest, and maybe even deliver items like flame-retardant blankets and fire axes.

The Black Manta also has a mapping tool for sectors like agriculture or mining. It can fly during the day and the night, and perform autonomous, programmable missions with real-time video feedback. The Man/Machine interface, which is already present on the KAYRYS, has been kept on the Black Manta. An interactive screen is directly installed on the drone, to allow live communication. Some of the missions SlidX said it could be used for including tactical support, fast intervention for counter-terrorism, and protection of sensitive sites, like nuclear power stations.

The Black Manta is currently available for sale, starting from CAD $6,500. The control range is 7 km, with a payload of up to 5 lbs, and can fly at speeds of up to 50 km an hour. Watch the video to see it in action: