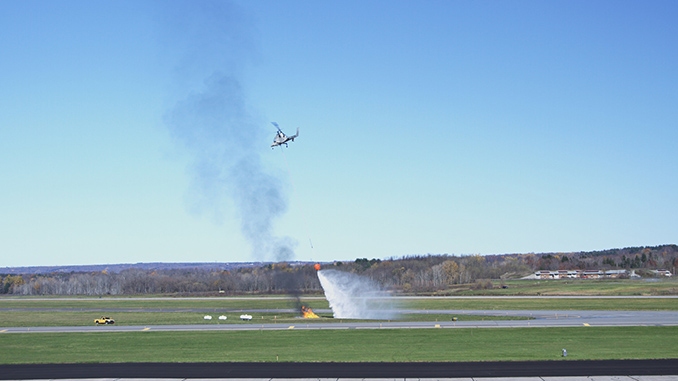 Lockheed Martin demonstrated for the first time how its suite of optionally-piloted helicopters and small unmanned aerial systems can work together to successfully locate and extinguish fires, pinpoint the location of a missing person, and bring that person to safety.

“When lives are at risk, advanced human-machine teams can complete dangerous missions without putting others in harm’s way,” said Dan Spoor, vice president, unmanned systems. “The advances that Lockheed Martin is pioneering in autonomous and unmanned technologies will lead to improved safety and efficiency for humanitarian aid, first response and other civil, commercial and military operations in the air, on land and undersea.”

Also during the demonstration, the Indago identified hot spots and relayed that information to an operator who directed the K-MAX to autonomously retrieve water from a nearby pond and drop it onto the fire, thus extinguishing the flames.

The Desert Hawk identified the location of a missing person and SARA, a modified S-76® commercial helicopter, conducted the search and directed the rescue. The Sikorsky MATRIX™ technology on SARA gives operators the confidence to fly large rotorcraft safely, reliably and affordably as autonomous or optionally piloted aircraft.

Lockheed Martin integrated the MATRIX technology with K-MAX so that SARA and K-MAX could communicate with each other during the demonstration. Using information provided by K-MAX, SARA autonomously scanned the area and found a safe place to land.

“Our goal is to support the integration of autonomy into aviation to improve the safety and capabilities for military and commercial missions. Utilizing MATRIX to support the mission in this demonstration highlights an example of the ability to reduce pilot workload and augment mission performance,” said Mark Miller, vice president, engineering and technology, Sikorsky, a Lockheed Martin Company.

“UAS traffic management must keep pace with the technology innovations that are bringing helicopters to the sky with a laptop or tablet,” said Lawrence Brinker, executive director & general counsel of the NUAIR Alliance. “The progress that has been made through the collaboration of federal agencies and companies like Lockheed Martin, will pave the way to help the Federal Aviation Administration safely manage air traffic without on-board pilots.”

Autonomous and unmanned systems are changing the way militaries operate and protect forces, the way first responders fight fires and how researchers explore the ocean terrains. Lockheed Martin is extending the capabilities of human-machine team to expand across air, land and sea domains.