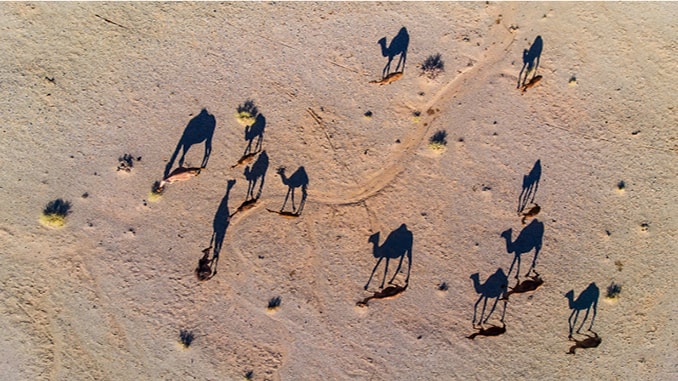 10 Amazing Drone Aerial Photos from Around the World

1. Infinity Road to Transylvania by Calin Stan – The Drone.ro
The true beauty and winding nature of Cheia (DN1A), a road in Romania that leads you into Transylvania, can only be shown through aerials as depicted here.

2. Ship Wreck at L’Agulhas by Dirke Heydenrych
A dramatic sunset is the perfect backdrop for this shipwreck off the Cape L’Algulhas headland in South Africa.

3. Favs by Eric Peniata
The picture-perfect moment of a surfer riding a wave.

4. Spillway Selfie by dixonltd
The symmetry of dams is something that can only be appreciated from above

5. Barskog by Atle Goutbeek
The sun and snow form a beautiful contrast in a wintery forest

Crop irrigation and agriculture can also be fascinating visually, as shown here with a barren triangle forming between three crop types planted in a circular motion for efficient irrigation.

7. Night lights by jeff
A private superyacht stands out with its lights in the dark waters at night from above.

8. Winter by Tomasz Walczack
A road cuts through the harsh starkness of a forest experiencing winter.

9. WWII airplane by Salim Madjd
A World War 2 airplane at the outdoor display of the Belarusian Great Patriotic War Museum is caked in snow from a light snowstorm overnight, with a photo taken during ‘blue hour’ in the early morning.

10. Camel by ABBAS RASTEGAR
Camels cast a long shadow in the sun of the desert on a trek to find water.

SkyPixel, the world’s largest community dedicated to aerial photography, today released its pick of top 10 aerial photos taken by aerial photographers from around the world. These photos were submitted to the SkyPixel 2016 Photo Contest, and were considered to be some of the best work in 2016 thus far.

The contest, which started in October and ends December 30, 2016, features prizes from sponsors includingDJI, Epson, Adobe, Insta360 and more. The contest is in partnership with Fstoppers, and features prominent award-winning judges. Users can enter in either the Enthusiast or Professional field, and submit to three categories, including Beauty, 360-degree aerial panoramas and Drones in Use.