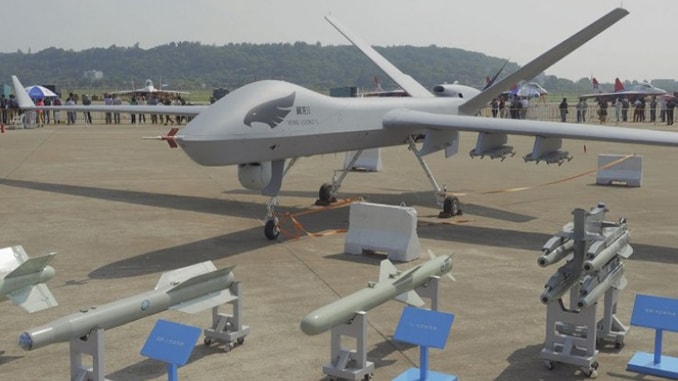 Developed by its Chengdu Aircraft Corporation (CAC) business unit, which is also responsible for building the J-20 next-generation multirole fighter for the People’s Liberation Army Air Force (PLAAF), the existence of the Wing Loong II was first unveiled in company literature at the 2015 Beijing Air Show. However, the company took the opportunity to debut a “production ready” version of the air vehicle along with an array of compatible UAV-launched weapons in Zhuhai.

The Wing Loong II bears a strong resemblance to the General Atomics Aeronautical Systems Inc MQ-9 Reaper UAV, with its low-wing monoplane slender fuselage and empennage with a prominent V-tail and ventral fin. Like its US-made counterpart, each wing incorporates three underwing hardpoints for external stores.

IHS Jane’s understands from AVIC that the UAV is constructed from advanced composites, with the latest official literature quoting an overall length of 11 m, a wingspan of 20.5 m, and a height of 4.1 m. This closely matches the Reaper’s dimensions of 10.97 m (length), 20.12 m (wingspan), and 3.81 m (height).

However, despite being almost identical in appearance and size, the Wing Loong II falls short in terms of overall flight performance with a stated maximum speed of 370 km/h and service ceiling of 30,000 ft (9,000 m) compared with Reaper’s 444 km/h and 50,000 ft. This is likely a result of the Chinese defence industry’s documented deficiencies in aerospace propulsion technologies, forcing manufacturers to import foreign engines or rely on less capable indigenous systems.

The Wing Loong II nevertheless improves on the first-generation Wing Loong I platform with twice the payload capacity at 400 kg and significantly improved endurance of 32 hours.