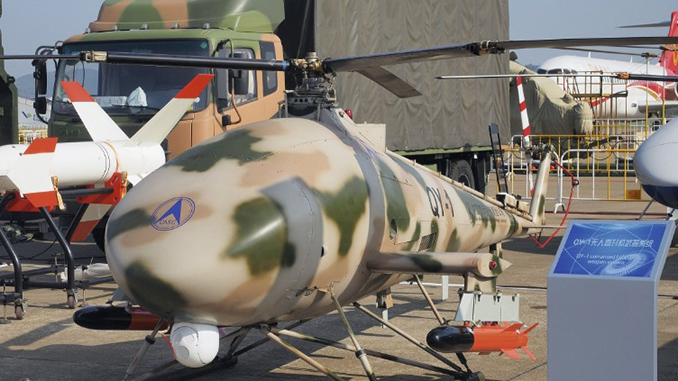 Designated the QY-1, the prototype on display features a constant-taper pod and boom fuselage – supporting a folding three-blade main rotor and two-blade tail rotor – with a small fixed tailplane each side of tailcone and a fixed twin-skid undercarriage.

The QY-1 is essentially a militarised variant of the V750, which was originally developed by Weifang Tianxiang Aviation Industry Co Ltd (now known as Shenzhen Tianxiang Aviation Industry Co Ltd) as a multipurpose VTOL platform that can be employed in civilian and military applications. The V750 is itself based on the US Brantly B-2B two-seat light helicopter design, which was acquired along with production rights by Qingdao Haili Helicopter Manufacturing Co Ltd, with the first Chinese-assembled example completed in 2009 and a first flight in mid-2011.

Specifications provided by CASC puts the QY-1 at 6.43 m in length and 2.11 m in height. The company also states that the air vehicle is capable of achieving cruise and maximum speeds of 145 km/h and 161 km/h respectively, with a climb rate in excess of 7.1 m/s.

While the QY-1’s propulsion system remains undisclosed, the base model V750 platform is powered by a vertically mounted Lycoming IVO-360-A1A flat-four engine that generates up to 134 kW (180 hp) of power.

“The QY-1 features a strengthened fuselage as well as some structural modifications to accommodate the additional avionics systems and external payload,” a CASC spokesperson told IHS Jane’s , adding that the prototype made its maiden flight in early 2016. More flight and integration trials are expected in 2017.

According to CASC, the QY-1 has been optimised for reconnaissance/surveillance and battle damage assessment (BDA) missions with an under-nose electro-optical infrared (EO/IR) sensor turret.