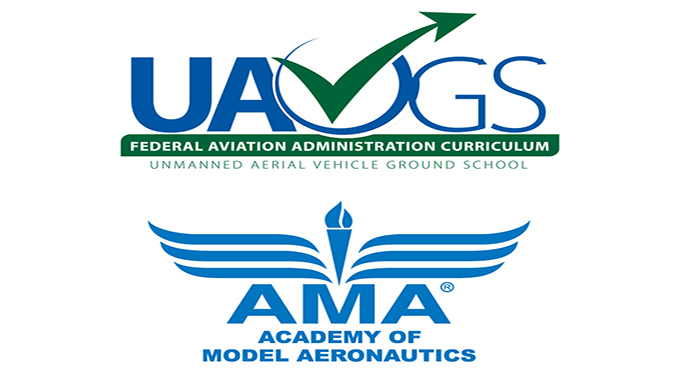 The Academy of Model Aeronautics serves as the nation’s collective voice for approximately 195,000 modelers in 2,400 clubs in the US and Puerto Rico. Recently appointed to the Federal Aviation Administration’s (FAA) Drone Advisory Committee (DAC), the AMA is the only community-based organization acknowledged by the FAA. AMA members have a strong safety record due to well-established safety guidelines and educational programs. The partnership with UAV Ground School offers Academy members a $75 discount towards FAA Part 107 test preparation and expands on the Academy’s long-standing safety and educational efforts.

The UAV Ground School program (UAVGS) is produced by the nation’s pilot education leader Gold Seal, who has prepared over 45,000 private pilots for their FAA Knowledge Test. UAVGroundschool.com is a program taught by FAA certified instructors and uses FAA compliant materials that are presented in an online, interactive, multimedia format allowing students to learn at their own pace. Built-in testing with real FAA test questions, an extensive documentation library, and flash card quizzes complement the program.  The program is created specifically for those wanting to increase their knowledge, become a professional UAV/drone operator and wishing to gain full FAA certification. In the months of August thru October 2016, UAVGS student registrations have approached the 3,000 mark.

UAV Ground School graduates may sit for the FAA Remote Operator Knowledge Test at any FAA testing center in the United States. Passing the FAA Knowledge Test and becoming a legal and safe operator gives graduates a major leg up as commercial UAV uses continue to explode.

Dave Mathewson the Academy’s Executive Director said, “UAV Ground School, produced by Gold Seal, is an excellent online resource for UAV operators preparing for the FAA Part 107 Remote Pilot Knowledge Test and it’s especially useful for AMA members who want to increase their aviation knowledge. The website is intuitive, the cost to our membership is affordable, and I think the folks that created UAV Ground School truly have the best interest of AMA membership at heart.”

Cliff Whitney, COO of UAVGS recently stated, “As a long time AMA member, I am extremely happy to partner with the Academy to bring additional education to the membership. These 195,000+ members have been flying remotely piloted aircraft years before UAVs became mainstream. AMA member pilots know how to operate safely and are the best candidates for the explosive growth of commercial operations. As an aircraft pilot and longtime UAV/drone remote operator, UAVGS is dedicated to providing proper training and safe operations. I am happy that the AMA has endorsed our program and sees the value it can provide to Academy members. As of October 14th the FAA has stated that there have been almost 20,000 Remote Pilot Applications and I’m proud that a large majority of them are UAVGS graduates.”

About Academy of Model Aeronautics:

The Academy of Model Aeronautics, founded in 1936, continues to be devoted to national airspace safety. It serves as the nation’s collective voice for approximately 190,000 modelers in 2,400 clubs in the United States and Puerto Rico. Headquartered in Muncie, Indiana, AMA is a membership organization representing those who fly model aircraft for recreational and educational purposes. For more information, visit www.modelaircraft.org.