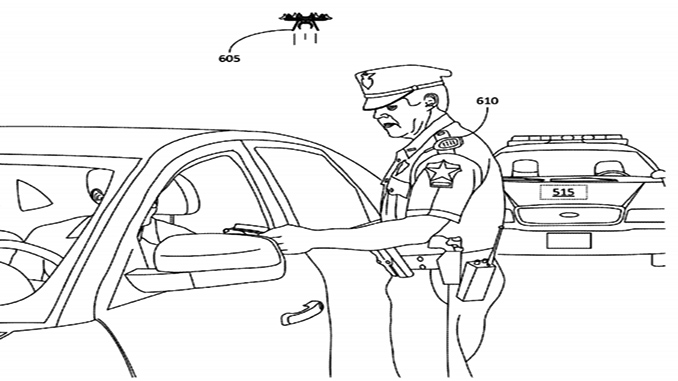 Amazon is working on adding an Alexa-like digital brain that can control drones small enough to fit in someone’s pocket and capable of locating lost items, cars and people, among many other things.

A patent awarded to Amazon on Tuesday shows the company is thinking about a lot more than drone delivery as it relates to unmanned aerial vehicles. The application cites a myriad of uses, including using a drone as a mobile police dash cam, a way to see how long a line for a show is and as a tool for finding a missing child. From the patent filing:

Performing all these tasks would likely take a lot of processing power. The drones would need to recognize voice commands, then analyze them, then perform the task and report back. In the case of finding a car that would involve searching for the car, taking pictures, analyzing those pictures to find the vehicle and then relaying the results.

Amazon wants these drones to be “smaller, lighter, and less expensive than conventional UAVs,” so the processor could be separate. And, Amazon suggests in the patent, it doesn’t just have to use voice commands. These drones could be commanded via smartphone app or computer as well.

And it’s not just drones Amazon sees this technology applying to. The patent notes these capabilities make sense for automated fixed wing aircrafts, helicopters and possibly driverless cars and trucks.

The technology could lead to a future where a bunch of tiny drones buzz around a humongous mall parking lot because everyone forgot where they parked or fly through the grocery store to find specific items for time-crunched shoppers.

Many situations arise in which a user may wish to review the situation from afar. This may be because the user needs a different vantage point (e.g., to see over a crowd), because the situation is dangerous (e.g., a foxhole or underground tunnel during a military maneuver), or because the user simply can’t find their car in a crowded parking lot. In these situations, and others, it would be convenient to have a UAV to provide video, audio, or other data remotely to a user without the necessity for a remote control or other equipment. It would be especially convenient if the UAV were small enough to be carried on a person.

Perhaps the most interesting uses of voice-assisted drones are for police and firefighters. Amazon in the patent describes drones that hovering above a traffic stop to provide a better vantage point as dash cams can be obscured in some situations. An officer could use a drone to go after multiple suspects at the same time, telling it to track one while the office pursues another.

No Replies to "Amazon Wins Patent For Voice-controlled UAV Assistant"