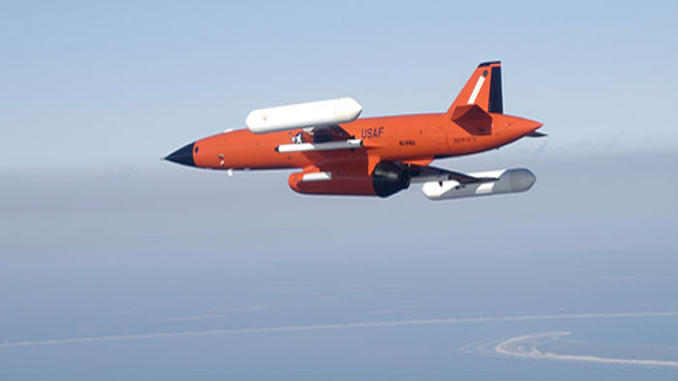 Contract to Increase the Capability and Demonstrate the Utility of the UTAP-22 in a Large, Complex Exercise

Kratos Defense & Security Solutions, Inc. (NASDAQ:KTOS), a leading National Security Solutions provider, announced today that it has been awarded a $12.6 million contract with Defense Innovation Unit Experimental (DIUx), in coordination with STRATCOM and the Strategic Capabilities Office, to explore the use of high speed drones in either fully autonomous or semi-autonomous roles to support fourth and fifth generation fighter aircraft.  To enable this concept development, the U.S. Department of Defense (DoD) needs to rapidly integrate and test both DoD and commercial capabilities onto a high-speed drone test bed.  Under this effort, the DIUx has contracted with Kratos for the integration of certain sensors into the UTAP-22, flight services, and for Kratos UTAP-22 to demonstrate in a large, complex exercise.  As part of this effort, Kratos has partnered with a non-traditional defense contractor and will examine new, innovative Unmanned Aerial Systems (UAS) operator interface concepts for controlling multiple high performance unmanned aerial vehicles.

The Kratos UTAP-22, is a high-performance unmanned jet aircraft designed specifically for tactical missions, collaborative missions with manned aircraft and tactical payload operations/delivery with key features focused on survivability in challenging and hostile environments.  The UTAP-22, an internally funded Kratos development initiative, has previously demonstrated the ability to conduct collaborative airborne operations with a manned fighter aircraft, an AV-8B Harrier; command and control through the tactical data link; execution of semi-autonomous tasks; execution of autonomous flight in formation with the AV-8B and with multiple UTAP-22s; transfer of UTAP-22 control between non-line-of-site (over the horizon) operators in the tactical network; and transfer of control (handoff) from the tactical network to an independent dedicated control link.

Jerry Beaman, President of Kratos Unmanned Systems Division, said, “The integration of sensors into the UTAP-22 increases the operational utility of the vehicle system and is another forward step in the Unmanned System Division’s Strategic Plan to increase the capability and demonstrate the utility of the UTAP-22 in a large, complex exercise.  Manned/Unmanned teaming of tactical aircraft with a UAV capable of tactical speeds and maneuverability will provide the warfighter with an inexpensive force multiplier and unmanned wingman; an unprecedented capability.”

About Kratos Defense & Security Solutions
Kratos Defense & Security Solutions, Inc. (Nasdaq:KTOS) is a mid-tier government contractor at the forefront of the Department of Defense’s Third Offset Strategy.  Kratos is a leading technology, intellectual property and proprietary product and solution company focused on the United States and its allies’ national security.  Kratos is the industry leader in high performance unmanned aerial drone target systems used to test weapon systems and to train the warfighter, and is a provider of high performance unmanned combat aerial systems for force multiplication and amplification.  Kratos is also an industry leader in satellite communications, microwave electronics, cyber security/warfare, missile defense and combat systems.  Kratos has primarily an engineering and technically oriented work force of approximately 2,800. Substantially all of Kratos’ work is performed on a military base, in a secure facility or at a critical infrastructure location. Kratos’ primary end customers are National Security related agencies. News and information are available at www.KratosDefense.com.