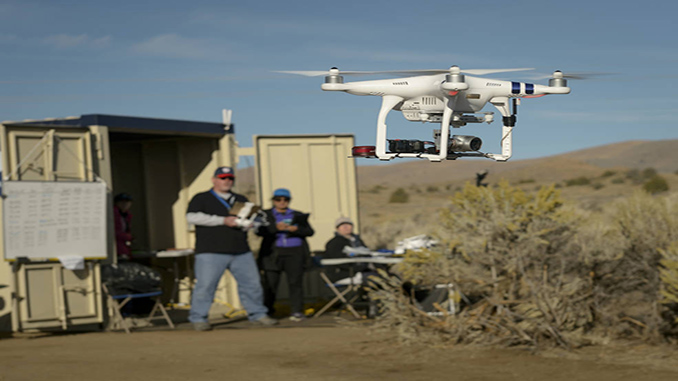 In mid-October NASA partners will fly five unmanned aircraft systems (UAS), commonly called drones, beyond visual line-of-sight of their human operators-in-command, to test planning, tracking and alerting capabilities of NASA’s UAS traffic management (UTM) research platform. During the test, two of the drones will fly beyond visual line-of-sight, and up to three drones will fly in the same test airspace, separated by altitude and within line-of-sight of their operators. The pilots will use the UTM research platform to give them information about all drones’ locations and proximity to surrounding operations. UTM will inform airspace users of potential hazards and conflicting operations that may impact their plans.

During the test NASA will demonstrate UTM’s Technical Capability Level 2 (TCL2) by connecting real drone tracking systems to the research platform, providing alerts for approaching drones and manned aircraft (live or simulated), as well as providing information about weather or other hazards. UTM partners will use various unmanned aircraft connected to the research platform to test beyond line-of-sight UAS operations so that NASA, in collaboration with the Federal Aviation Administration (FAA), can obtain information to further refine and develop the research.

When the three drones fly close to each other, they will be within view of their operators. Currently, FAA regulations require that drone operators be able to see other aircraft in order to avoid them, which limits many potential applications for UAS technology.  The UTM demonstration will gather information that will help regulators and researchers assess the capabilities and procedures that could support beyond visual line-of-sight operations.   The operators will also use common data exchange protocols—developed jointly by NASA, industry, and FAA—to make notifications of their intended use of airspace as well as any real-time constraints.

Upon completion of UTM TCL2 tests, NASA will offer these capabilities to all FAA test sites for further validation and assessment of UTM TCL2.  UTM’s Technical Capability Level Three testing is planned for January 2018 and will involve evaluating tracking procedures for managing cooperative and uncooperative drones to ensure collective safety of manned and unmanned operations over moderately populated areas. Technical Capability Level Four planned for 2019 will involve higher-density urban areas for autonomous vehicles used for newsgathering and package delivery, and will offer large-scale contingency mitigation.