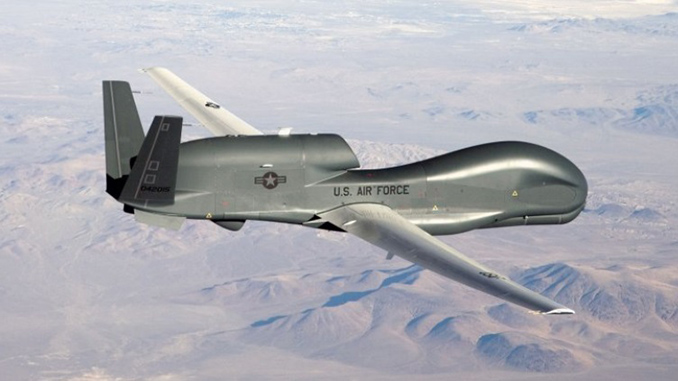 “That was the first of five planned flights,” Mick Jaggers, Northrop Grumman vice president and Global Hawk programme manager, told IHS Jane’s . Two more flights this month will focus on setting the camera lens depth. A final flight around the second week of November will mimic an operational mission, he added. After all the tests are complete, Jaggers expects the Optical Bar Camera to become part of the Global Hawk programme “so that combatant commanders can task Global Hawks with camera missions”.

The OBC has previously only flown on the manned Lockheed Martin U-2 reconnaissance aircraft. It was integrated onto the Global Hawk airframe via Northrop Grumman’s Universal Payload Adaptor, which is fitted underneath the aircraft and is designed to offer an open interface and power bus for payloads; it has a 1,200 lb (544 kg) capacity. The OBC is a long focal length camera that provides very high resolution panoramic images from extreme altitudes. It uses wet-film magazine and has previously been identified as having a 762 mm focal length, and a 114×1,854 mm image format.

Earlier this year Northrop Grumman successfully flew another U-2 sensor – the SYERS-2 – on the RQ-4. Several non-military surveillance payloads have also been flown on the UAS. NASA has successfully integrated and flown more than 30 different information-gathering payloads, for example.

Meanwhile, the company is also planning to begin integration of the MS-177 multispectral sensor, previously flown aboard the company’s legacy E-8C Joint Surveillance Target Attack Radar System (JSTARS) aircraft, on the RQ-4 for the US Air Force. Initial Operating Capability for that system is expected in 2017, with a Full Operating Capability likely in 2019, Jaggers confirmed.