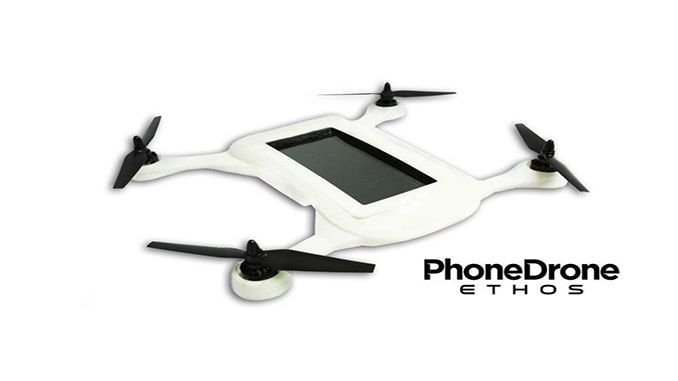 Drone startup xCraft has released the final design of their PhoneDrone Ethos. The company has created the only drone that uses your smartphone as the camera, GPS, and processor of the aircraft. The quadcopter will pair with an onboard device via bluetooth connection and allow for autonomous missions, such as “selfie mode”. The craft can also be controlled by another device from the ground through an app.

xCraft has continually refined its PhoneDrone Ethos, making it a sleeker, more durable design. The bay for the smartphone has undergone rigorous testing and will provide water-resistant and shock-resistant protection.

The PhoneDrone is portable and will fit any device up to a 5.5 inch screen and is compatible with both Android and iOS operating systems. A detachable mirror will allow for a variety of angled shots and forward vision.

The controller app has also undergone extensive modifications and is ready to make any smartphone fly! With simplified controls and an onboard display, users will easily be able to control their phone in real time from the sky.

The startup from North Idaho will be releasing PhoneDrone Ethos this fall at a retail price of $399 USD. It is currently for sale on pre-order from xCraft’s website for $299 USD.

xCraft, based in Coeur d’Alene, Idaho, was founded in 2014 with the mission to develop small, powerful flying machines that change the world.  Through several successful crowdfunding campaigns and a historic deal on ABC’s Shark Tank, the company received the capital it needed to pursue this mission. xCraft has delivered an impressive line of industry-changing designs, including the X PlusOne, PhoneDrone Ethos, the 100 MPH Rogue Racer, and the x2 for the agricultural and security markets.

No Replies to "Introducing the finalized PhoneDrone Ethos from xCraft!"