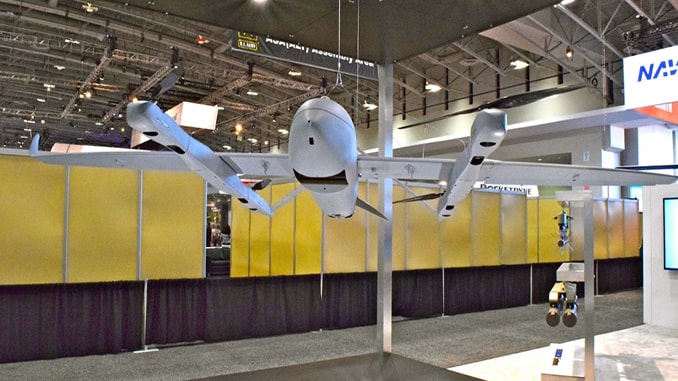 Textron Systems has at least one potential customer for a vertical takeoff and landing (VTOL) version of its Aerosonde small unmanned aircraft system. The Aerosonde Hybrid Quadrotor (HQ) adds four rotors to what is otherwise a catapult-launched fixed-wing aircraft.

“Our customer has asked us for an estimate in terms of time and dollars to get it out there,” said David Phillips, Textron Systems vice president of small and medium endurance UAS. While he declined to identify the interested customer, the majority of Aerosonde users are military services, including the U.S.Marine Corps, Air Force and Special Operations Command.

Textron Systems announced in late April that it had demonstrated a VTOL version of the Aerosonde with assistance from Latitude Engineering and Cloud Cap Technology. The company exhibited a full-sized model for the first time at the Association of the U.S. Army (AUSA) conference that began October 3 in Washington, D.C. It plans to further demonstrate the aircraft later this week at its new Unmanned Systems Service and Support Center in Blackstone, Va.

The Aerosonde has accumulated more than 150,000 flight hours over its history and now operates 6,000 hours a month as a contractor owned and operated service Textron Systems provides to its customers. The Aerosonde HQ, in development since early 2015, “is an application in the field of a kit on a very mature aircraft,” noted Phillips. VTOL capability is accomplished by replacing the twin structural booms of the aircraft with two thicker booms, each supporting two small rotors powered by electric motors. The rotors raise the aircraft from the ground, then align with the booms for aerodynamic efficiency. The Aerosonde’s Lycoming EL-005 heavy-fuel engine propels it in horizontal flight.

The VTOL version of the Aerosonde requires less equipment than even the Flying Launch and Recovery System (Flares) that Insitu has developed for its smaller ScanEagle unmanned aircraft. Not a kit, Flares is a separate quadcopter that lifts the ScanEagle to a launch altitude, then recovers it in flight with a suspended rope. “With four electric, independently powered motors you can get rid of the launch and control element,” Phillips said. “You can be extremely expeditionary.”

There is an “endurance trade” of about 30 percent using the VTOL version, however. In traditional configuration, the Aerosonde is capable of flying for 15 hours; the Aerosonde HQ fitted with an electro-optical/infrared sensor payload stays aloft for eight hours—with 10 hours as the goal, Phillips said.

Textron Systems promotes the 80-pound Aerosonde for missions including intelligence, surveillance and reconnaissance (ISR), signals intelligence and communications relay. The company has discussed with the U.S. Army the possibility of developing a VTOL version of the 460-pound RQ-7B Shadow, but that is not a formal program, Phillips said.

FreeSkies Announces the Full Release of CoPilot for DJI