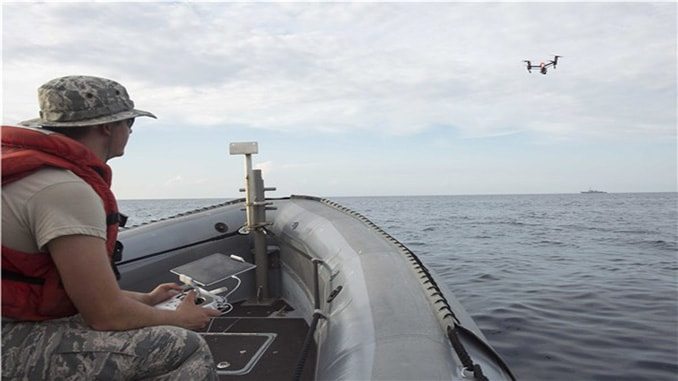 The U.S. Navy has announced that it has tested counter-unmanned aerial system (C-UAS) capabilities aboard guided-missile destroyers USS Jason Dunham (DDG 109) and USS Lassen (DDG 82) during exercise Black Dart off the coast of Destin, Florida.

The exercise provides a venue where participants from industry, government and operational forces can bring different systems together, share awareness of the latest developments in C-UAS capabilities, and train, evaluate and improve upon current systems.

“We got a lot of work accomplished yesterday validating and experimenting with new systems that we have,” said Cmdr. Kevin Hoffman, Jason Dunham’s commanding officer. “Overall, the communication across all the Department of Defense agencies and different entities that we have here has been great. We have the opportunity to employ some systems that we have not tested before, so it’s a great experience for not only the ship, but the outside operators as well.”

Black Dart scenarios provided a realistic training environment for both Jason Dunham and Lassen to track UASs launched from Eglin, Air Force Base. In the initial scenarios, routes of the UASs were known to all operators, which allowed all systems, linked operators and sensors the ability to verify system settings and operator procedures. In advanced scenarios, routes of UASs were unknown, which increased the realistic aspect of the training.

“The goal here is to test our organic sensors radar systems, camera systems and interface with the shore side [operators] who are testing systems for the same purpose,” said Lt. Cmdr. Carl Poe, the combat systems officer aboard Jason Dunham. “We want to communicate and coordinate to expand our battlespace and reduce reaction time we have from detection to engagement of these UASs.”

Air Force cadets from the U.S. Air Force Academy operated UASs from Jason Dunham’s rigid hull inflatable boat about two nautical miles away from Jason Dunham, providing an opportunity for the cadets to test the UASs in a maritime environment and allowing Jason Dunham opportunities to test sensor and tracking systems from different ranges and elevations.

“Great job to the Air Force cadets with their first time operating a quad-copter in an at sea environment, and landing it in a two-foot by two-foot space,” said Hoffman. “It allowed us to test our detection capabilities, and evaluate our tactics, techniques and procedures, which is what Black Dart is allowing us to focus on.”

No Replies to "US Navy Tests Counter-UAS Capabilities Aboard Warships"