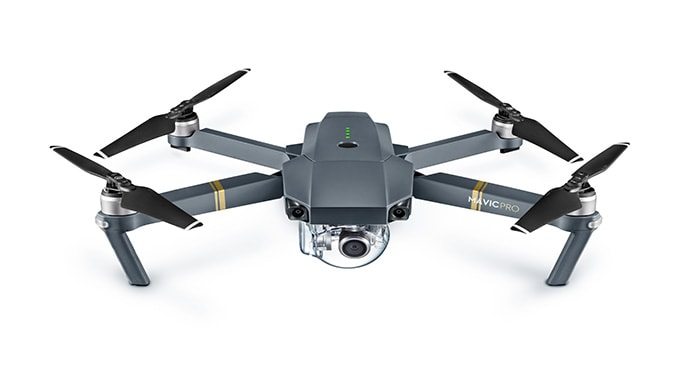 Mavic Pro is DJI’s first personal drone designed to be taken just about anywhere. Small enough to toss in a bag and easy enough to launch quickly whenever the time and place are right, its unique folding design compresses the entire drone to practically the size of a water bottle.

The compact body of Mavic Pro holds a drone built for uncompromising performance. Equipped with a stabilized 4K camera and a visual navigation system, with a 4.3 mile (7 km) range and 27 minute flight time, Mavic Pro sets the new standard for compact drones.

“DJI has spent a decade making it easier for anyone to fly, and by rethinking everything about how a drone looks, we have created an entirely new type of aerial platform for anyone to explore their creativity,” said Frank Wang, DJI’s CEO and founder.

“Mavic Pro is a technological triumph filled with features that once again show how DJI leads the industry. Most importantly, Mavic Pro allows you to reach the skies easily, see the world with new eyes and tell your stories like never before.”

Mavic Pro is designed to be ultra portable and quick to launch so it can take to the skies as soon as you need it. With four folding arms and propellers that tuck neatly away against its streamlined body, it can be easily carried in a purse or backpack, saving you the trouble of mounting propellers before a flight. It can be operated by the powerful long range remote controller, or simply by your smartphone at shorter range. When controlled by a smartphone, the whole system can be set up and airborne in less than a minute to capture every key moment.

FlightAutonomy can position, navigate and plan routes for Mavic Pro, enabling it to avoid obstacles in various environments, with or without the help of satellite signals. FlightAutonomy provides a significant boost in working range and can cope with complex 3D environments. For navigation and obstacle avoidance, FlightAutonomy provides a superb speed-range envelope to make Mavic Pro self-navigational in various intelligent flight modes, and will avoid most obstacles at speeds up to 22 mph (36 kph).

An ultra light and aerodynamic airframe, together with DJI’s state-of-the-art propulsion and battery system, enables Mavic Pro to fly for up to 27 minutes. To experience the pure joy of flying, Mavic Pro can be switched to Sport Mode, which allows speeds of up to 40 mph (64.8 kph), increasing the drone’s agility and responsiveness. Mavic Pro flies smoothly and will remain stable in winds of up to 24 mph (38.5 kph), and uses DJI’s GEO geofencing system to help identify restricted areas, preventing flight in locations that might raise safety or security concerns automatically, and helping pilots make smarter decisions about when and where to fly.

As with all DJI drones, Mavic Pro is set to automatically return to its launch location if it ever loses contact with the controller or reaches critically low battery levels. The new Precision Landing feature records a burst of video with two stereo cameras every time Mavic Pro launches, then uses both video and satellite information when it returns to land within an inch of where it took off. If a pilot lets go of the controls, the drone will simply hover in place.

Mavic Pro’s small size is packed with powerful features. DJI’s advanced technology now includes our smallest-ever three-axis gimbal for shake-free photos and video. The autofocus camera features a minimum focusing distance of just 19 in (0.5 m) and can be flipped 90 degrees to portrait mode for vertical selfies and video. Mavic Pro records 4K video at 30fps and full 1080p HD at 96fps. Its 12-megapixel camera with Adobe DNG RAW support has been expertly tuned for aerial images. With the help of the high-precision gimbal, you can confidently shoot 2-second-long exposures in the air to get the most jaw-dropping aerial images.

A revolutionary new compact remote controller has been designed to provide a fully ergonomic experience with optimum comfort, and can accommodate a smartphone or control Mavic Pro on its own. Its built-in LCD screen displays essential telemetry data, while dedicated buttons for functions such as Return-to-Home and pausing during Intelligent Flight modes ensure a confident flight every single time. The video link system, OcuSync, represents new heights in DJI’s communication technology. It supports a range up to 4.3 miles (7 km) and live view resolutions up to 1080p.

The new band management algorithm makes OcuSync more robust in environments with many frequencies in operation. Mavic Pro is equipped with dual-band WiFi as a secondary link, allowing easy control via your smartphone for close range operation or for quick downloading of content from Mavic Pro straight to your device.

Most Intelligent Drone Ever

The powerful systems inside Mavic Pro are easy to use, even for beginners. Using just your phone’s touchscreen, you can use TapFly to direct Mavic Pro to go wherever you want, avoiding obstacles along the way. When you want to take a hands-free selfie, FlightAutonomy makes it possible to control the drone completely with just your gestures.

In Gesture mode, you can use gestures to have Mavic Pro locate you, center you in the frame and take the perfect shot as Mavic Pro’s flashing lights count down to the photo. Sharing your best aerial moments has never been easier with live streaming to Facebook Live, Periscope and YouTube through the DJI GO app.

An updated version of DJI’s ActiveTrack recognizes common subjects such as people, bicyclists, cars, boats and animals, which then sends Mavic Pro to follow behind, lead in front, circle above or track alongside the subject, keeping the camera focused on the subject while you concentrate on flight maneuvers. The new Terrain Follow mode means that you can race up a slope behind a subject while remaining at a constant height between 1 ft (0.3 m) and 33 ft (10 m).

At the other extreme, the new Tripod Mode is designed for indoor use, slowing and fine-tuning Mavic Pro’s position and angle based on controller movement inputs to allowing for precision framing and safe indoor flight.

Mavic Pro also pairs with DJI’s new immersive DJI Goggles, displaying an 85-degree view from the drone in full 1080p for a true bird’s-eye view of the world below. With built-in OcuSync, the goggles receive video directly from Mavic Pro in the air and not through the controller, reducing lag to a minimum – and allowing you to share the in-flight view with a friend.

Specially designed for aerial first-person view (FPV) applications, DJI Goggles allow you to flick between third person view and FPV in under a second. You can comfortably wear your glasses while wearing the goggles and quit FPV mode instantly by flipping the mask up.

Mavic Pro’s U.S. retail price will be $999 with the remote controller included, and $749 without the remote controller. Additional Mavic Pro Intelligent Flight Batteries will cost $89. A Mavic Pro Fly More Combo, which includes a Mavic Pro, two extra Intelligent Flight Batteries, extra propellers, a charging hub, an adapter, a car charger and a shoulder bag, will be available for $1,299.

Mavic Pro is immediately available for pre-order at dji.com/mavic and will begin shippingOctober 15. It will also be available in mid-October at DJI’s three flagship stores in Shenzhen, Seoul and Hong Kong. Mavic Pro can also be ordered on Apple.com and will be available in Apple Stores in early November.

A new optional protection plan, DJI Care Refresh, is available in select countries and provides peace of mind for Mavic Pro owners. DJI Care Refresh covers accidental damage to the Mavic Pro aircraft, gimbal or camera during normal use for up to 12 months, and for an additional charge will offer up to two full replacements that are new or equivalent to new. DJI Care Refresh is available for $99 before a new Mavic Pro is activated, or within the first 48 hours after activation.