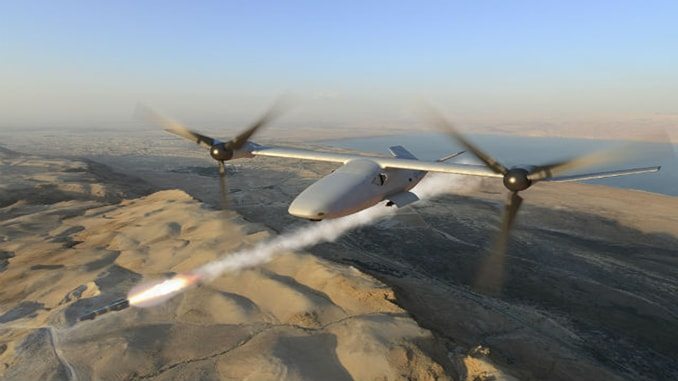 Bell Helicopter has unveiled a unmanned tiltrotor aircraft, the V-247 Vigilant, as it looks towards a future requirement from the US Marine Corps for a large, armed platform capable of operating from ships.

Although the USMC already has smaller group 1 and 3 UAVs in its inventory, including the Textron Systems RQ-7 Shadow and Boeing Insitu RQ-21A Blackjack, the service outlined its need for larger armed systems in its 2016 Marine Aviation flight plan – an effort to end its reliance on the the US Air Force’s fleet of MQ-9 Reapers and MQ-1 Predators for expeditionary missions.

However, the service is still defining the precise requirements of MUX, it says.

Bell has not addressed MUX specifically, but says Vigilant will satisfy the USMC’s needs as outlined in the plan, and could make the aircraft ready for production as early as 2023.

That would align with the service’s timeline, which calls for a technology demonstration effort in 2018 and initial operational capability in 2026.

But Bell believes technologies leveraged from its developmental V-280 Valor can help it address the likely MUX requirements.

“We said could produce an aircraft that looks like it meets the requirements or the concepts that the plan put out: shipboard compatibility, expeditionary, lethal reach and digitally interoperable,” says Todd Worden, who handles global military business development at Bell. “We used all that information to generate this design.”

The Vigilant is equipped with three internal payload bays, a centerline payload and the capability to house up to two underwing pylons per side, Worden says. The aircraft could handle Lockheed AGM-114 Hellfire or JAGM missiles, but the specific weapons will depend on the USMC’s requirements, he adds.

Autel Robotics CEO Steve McIrvin To Serve On CTA Board