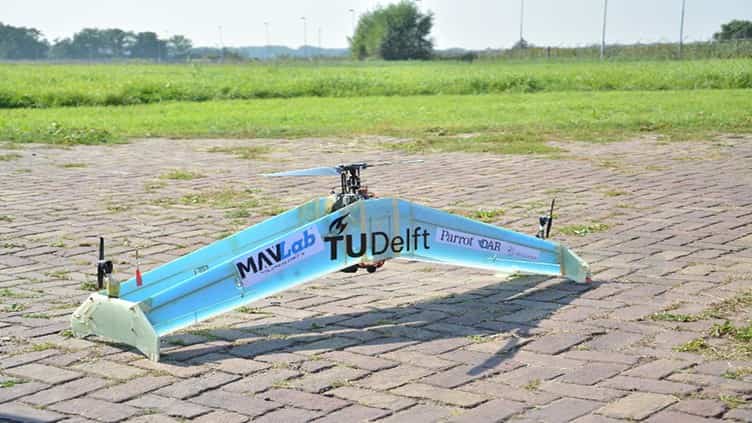 It takes off like a helicopter, then tilts 90 degrees and flies like a plane, using a single rotor blade. Because of that, it is light weight and can fly long distances. Meet the delftAcopter: a new autonomous hybrid drone, developed in the MAVLab of Delft University of Technology. This revolutionary drone can, for example, be used for search and rescue missions at sea. At the end of this month, the delftAcopter makes its debut at the UAV Outback Challengein Australia.

The MAVLab may be famous for the Delfly, but a lot research is being done on hybrids as well, tells project coordinator Bart Remes. He runs the team of researchers that developed the delftAcopter. “Building hybdrids, a combination of planes and helicopters, is much more challenging than what is more often used: quadplanes.” Quadplanes are airplanes which can take off vertically due to the use of extra rotor blades. But they don’t have to tilt their air frame in mid-air, which is much more difficult in terms of the autopilot, software and control.

The delftAcopter is a biplane aircraft:  it has a double wing to limit the influence of the wind while taking off and landing. It has a single big rotor blade for propulsion and two small rotors for stability. The wing span is about 1.60 metres, it can fly about 100 kilometres an hour and has a range of 60 kilometres. The drone is equipped with GPS and the latest on-board video techniques, so that it can fly autonomously. Remes and his team worked on the delftAcopter for a year. 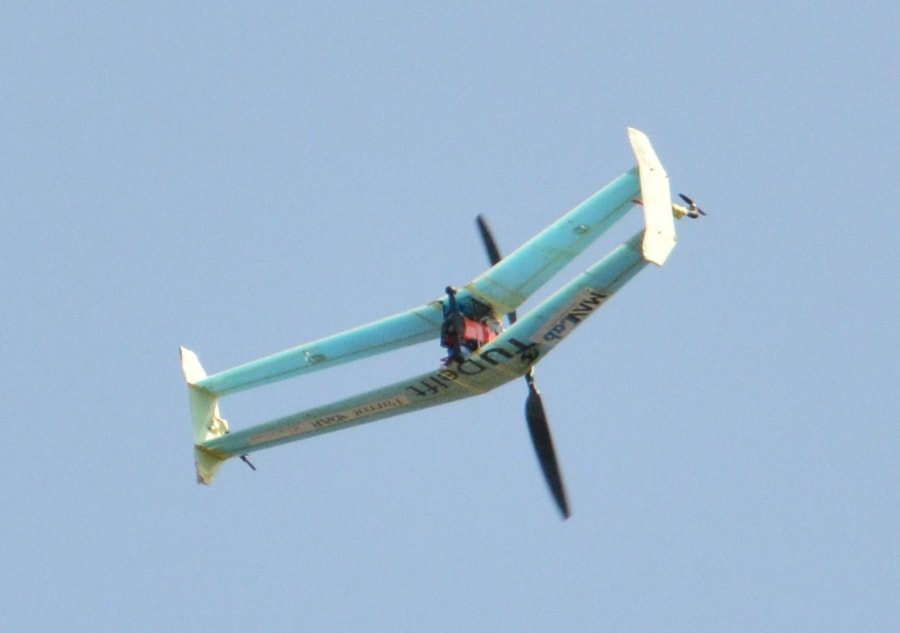 The delftAcopter is a biplane aircraft:

“Our hybrid drone has several advantages compared to quadplanes”, explains Remes. The most important one is the saving of weight. “We use the same propeller for hovering as well as the forward flight. This innovative technology saves energy and thereby increasing the range.” And because it is an airplane, it can cover longer distances than a helicopter. “That is the main reason: we wanted to develop a hybrid drone that resembles an airplane as closely as possible. That’s why we didn’t want to add any extra weight.”

Next to that, the delftAcopter is completely electric. With drones that use fossil fuel, weight saving isn’t so important. “We made it extra difficult for ourselves because we are a university”, says Remes. “We firmly believe in the importance of making very efficient airplanes without extra weight that can take off and land vertically. Besides, drones with electric propulsion are easier to operate.”

Thanks to the autopilot the deftAcopter is capable of full autonomous flight, including: autonomous take-off, autonomous transition to forward flight and back, and autonomous landing. The 10DOF IMU, GPS and pitot-tube provide all necessary information for autonomous flight. The IMU is used for attitude estimation and barometric pressure gives AMSL altitudes. The GPS together with the IMU are used for position estimation for autonomous navigation and geo-fence crossing detection. The airspeed sensor provides airspeed data to the autopilot for optimal flight performance and to maintain the UAV within its flight envelope.