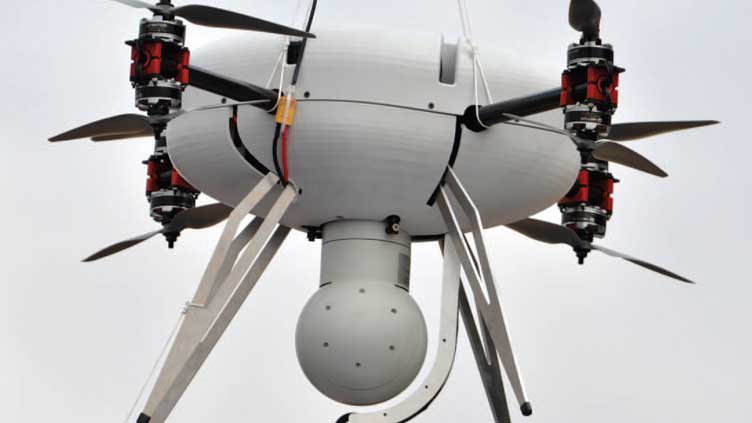 Paramount Advanced Technologies (PAT) is currently developing a Persistent Surveillance Tethered Drone for missions such as border control and anti-poaching, and is displaying the aircraft at the Africa Aerospace and Defence exhibition this week.

The tethered quadcopter unmanned aerial vehicle (UAV) can hover at a height of around 100 metres and because it is powered by a cable from the ground, has an unlimited operational time. As it is tethered, it is easy to operate as it does not need a flight qualified operator.

Several payload options are being considered, such as optronics and communications. Optronics payloads include a camera and thermal imager.

Paramount told defenceWeb that a prototype has already flown some demonstration flights and the company hopes to have a finalised prototype by the end of the year.

Also at the AAD exhibition, PAT is showchasing a simulated integrated command centre with leading South African defence industrial partners. It also has its Mwewe, Civet and Roadrunner UAVs on display.

PAT specialises in mission systems for land, air, sea and joint warfare platforms and offers communications and weapons systems, sighting and helmet sighting systems, systems integration and unmanned aerial vehicles, amongst others. The company has supplied avionics for the South African Air Force’s Hawk jet trainers, upgraded Mi-24 helicopters and fitted weapons and sensors on Mi-24 and EC635 helicopters. It offers its FLASH weapon and sensor suite for helicopters – this includes 12.7 and 20 mm machinegun/cannon pods, guided or unguided rockets and missiles.

PAT’s range of UAVs includes the Mwewe, RoadRunner and Civet. The Mwewe has a three metre wingspan and 25 kg maximum takeoff weight. It has an endurance of around four hours and speed of 80 km/h. It takes off and lands on a runway. The 5 kg Civet is powered by an electric motor and has a speed of 50 km/h and endurance of one hour. The 15 kg Roadrunner is powered by a petrol engine and is catapult launched. It has a cruising speed of 120 km/h and endurance of two hours.