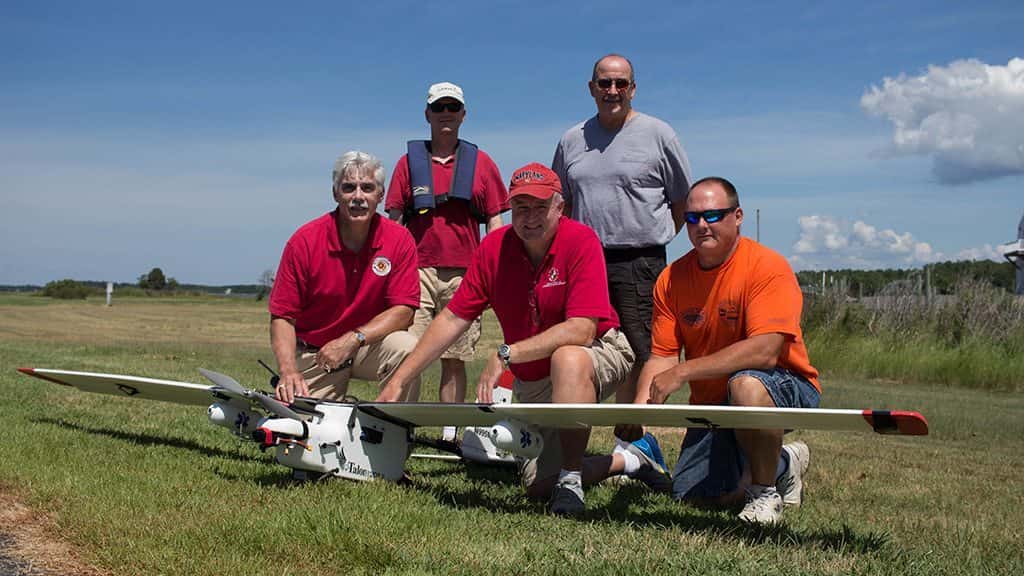 “This is a major achievement for our test site and for the University of Maryland,” said Darryll J. Pines, Dean of the A. James Clark School of Engineering. “What this flight demonstrates is the incredible potential that UAS have in assisting first responders in emergencies. As more of these aircraft enter the skies, demonstrations of their use in service to humanity will grow substantially.”

Weighing 22 lbs. at take-off, the small UAS was hand launched from the shores of Flag Ponds Nature Park in Lusby, Md. and landed at Ragged Island Private Airport in Cambridge, Md., flying 12 miles in total. It was greeted by a security officer from UM’s Shore Regional Health who retrieved the package and transported it to the UM Shore Medical Center at Dorchester. Watch a film of the flight here: http://go.umd.edu/bayflight.

“We wanted to simulate a situation when weather, traffic, or other disaster made more traditional means of transportation impossible. UAS are faster to deploy, less weather dependent, and less expensive,” said Matthew Scassero, Director of the UMD UAS Test Site.

“Through this partnership with the University of Maryland Unmanned Aircraft Systems Test Site, Shore Regional Health was able to explore new ways of providing access to medical care to rural areas of the eastern shore,” says Dr. William Huffner, Chief Medical Officer and Senior Vice President, Medical Affairs at Shore Regional Health. “Being on the forefront of innovation and technology will help Shore Regional Health continue to be the region’s leader in patient centered health care.”

UAS technology has the potential to bring supplies to medical staff, but also directly to patients in isolated areas. “In emergency situations, every second counts,” said Scassero. “Imagine being able to deploy insulin or another critical medication to someone in need by landing or dropping it right in their backyard.”

The Talon 120LE is made of 7075 aircraft grade aluminum, foam and composite materials. Scassero said that the team chose a Talon 120LE because of its “payload capacity, stability and reliability.” With an endurance of greater than two hours, its modular nose payload section and wing pods it can carry experimental payloads up to 2.5 lbs. The aircraft flies autonomously and lands on its belly.

Scassero believes that use of UAS technology will be critical in emergencies of the future. “Using UAS for cargo will allow them to operate in tandem with manned aircraft to work together for these types of humanitarian missions and others, such as search and rescue,” he said.