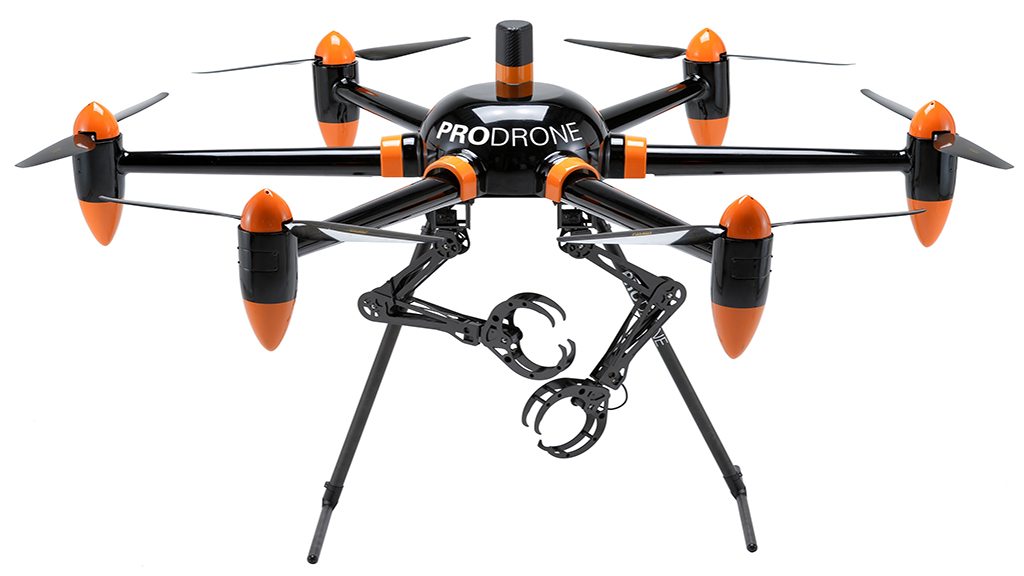 Prodrone Co., Ltd. is pleased to announce it has developed the PD6B-AW-ARM, a large-format drone equipped with two internally-developed robotic arms, enabling it to directly accomplish a variety of tasks.

PRODRONE will showcase the new model at its booth at InterDrone, The International Drone Conference and Exposition, to be held September 7-9, 2016 in Las Vegas.

PRODRONE, headquartered in Nagoya, Japan, has developed a wide range of commercial and industrial drones through development agreements with numerous industrial drone companies.

Up to now the industrial and commercial drone market has focused on using drones for photography and filming, mapping, surveying, spraying pesticides, etc., but there is increasingly strong demand for drones to be able to directly perform specific “hands-on” operations.

Examples of these operations include the abilities to grasp and carry differently shaped cargo using its arms; to attach or join things; to cut cables; to turn dials; to flick switches; to drop lifesaving buoys; to retrieve hazardous materials, etc. Drones must be able to perform a variety of operations at high altitudes, over long distances, and in places where it would be too dangerous for humans.

The PD6B-AW-ARM is based on PRODRONE’s large capacity PD6B-AW airframe, which has a maximum payload of 20kg (44 lbs.). For the new model the company’s development team designed, produced and attached two high-performance, completely original 5-axis robotic arms. They give the drone versatility to perform across a wide range of situations. The robot arms can carry a maximum payload of approximately 10 kg (22 lbs.), and with flight time of up to 30 minutes, this drone can also excel at longer tasks.

PRODRONE’s CEO, Masakazu Kono commented, “PRODRONE has won high acclaim from numerous industrial drone businesses because we develop highly reliable, highly safe, high-performance industrial drones. We are firmly focused on the future of commercial drones and on being world pioneers in developing ‘task-oriented drones.’ The PD6B-AW-ARM makes a whole new range of tasks possible, and I am confident that nobody else could have made it.”

With its unrivaled engineering and technological skills, Prodrone Co., Ltd. aims to be the world’s number one developer of commercial and industrial drones.

PRODRONE is a B2B industrial drone system manufacturer established in Nagoya, Japan, in January 2015 by experts with over 20 years of experience in a variety of specialized fields. Since its founding, PRODRONE has developed an assortment of customized industrial drones on consignment for numerous drone service providers and manufacturers in the industrial drone market. The company’s successes include large drones that can carry 30kg (66lbs) of payload, drones specifically designed for laser surveying, drones capable of surveying at high-altitudes over 5,500m (18,000ft), drones able to land on water, drones capable of reading RFID at high speeds, drones designed to inspect bridges and other infrastructure, all-weather large-format platforms, drones for pesticide spraying, numerous drones for academic research, and many more. PRODRONE specializes in drones that require superior technical precision – the ones no one else can build. The company has earned the confidence of government agencies and leading companies through quick response to clients’ needs. PRODRONE is now widening its view to help drone service providers and manufacturers of the world expand their businesses globally.