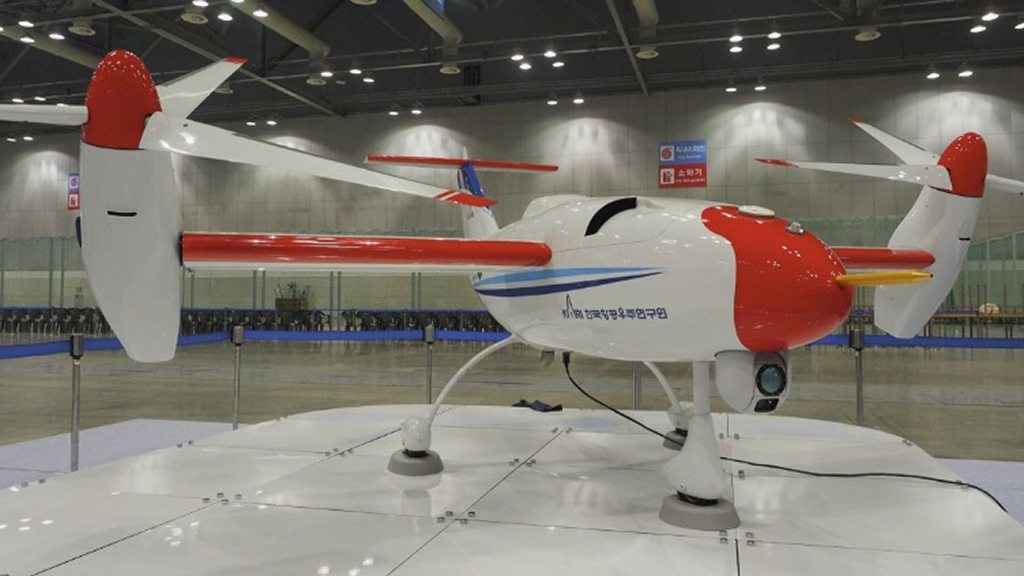 According to specifications provided by KARI, the TR60 – which is constructed from lightweight composites – measures 3 m in length as well as wingspan (and approximately 5 m from one rotor tip to another), and has a maximum take-off weight (MTOW) of 210 kg. A 55 hp rotary engine transfers power mechanically to the twin swivelling nacelles, enabling the UAV to operate at a top speed of 250 km/h at a maximum altitude of 14,763 ft.

The TR60 is also capable of carrying a 30 kg payload, with the prototype shown at KINTEX equipped with a nose mounted and stabilised FLIR Systems electro-optical/infrared (EO/IR) sensor turret. KARI also specifies a 200 km operating radius for the UAV, as well as the ability to perform automatic take-off, hover, and landing.

Dr Kim Jai Moo, Senior Technical Fellow at KARI, told IHS Jane’s that the TR60 has been developed as a market-ready variant of the institute’s experimental 1,000 kg MTOW Smart UAV tiltrotor. According to Dr Kim, the Smart UAV programme was launched in 2002 with a total funding of USD120 million provided by the Ministry of Commerce, Industry and Energy (MOTIE) over 10 years, with a successful demonstration performed in 2011.

The Smart UAV, in comparison, measures 5 m in length and wingspan, and is powered by a 550 hp turboshaft engine that enables it to achieve a 500 km/h maximum speed and operating altitude of 19,685 ft. The larger platform is also capable of carrying a payload of up to 90 kg.

“We basically started from scratch as we had no experience with tiltrotor technology,” he said, adding that some of the challenges that had to be addressed included the inherent instabilities experienced during the transition between helicopter and aircraft modes.

Production Of The Russian Korsar UAVs Will Start In 2017