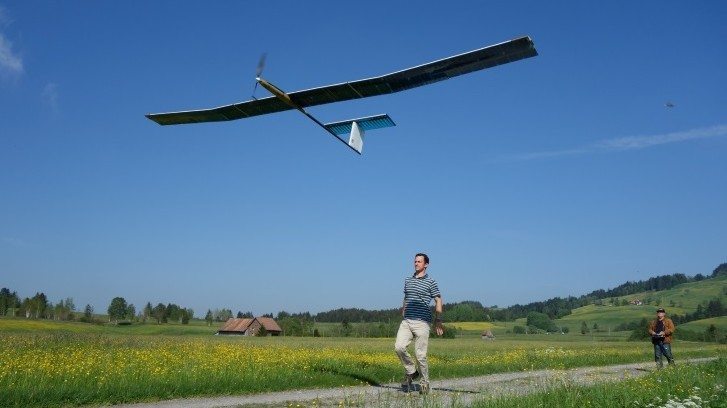 The team behind the AtlantikSolar UAV has announced that the aircraft has completed what is claimed to be the first-ever fully-autonomous (from launch to landing) solar-powered perpetual flight with significant payload (Color + Thermal Camera) in a 26-hour search-and-rescue mission. While previous 81-hour and 28-hour endurance record flights were important milestones that demonstrated the perpetual endurance capability of AtlantikSolar, they required manual pilot control for launch and landing and did not carry any aerial imaging payload.

However, the latest flight demonstrated ease-of-use through full launch-to-land aircraft autonomy as well as significant payloads to help rescue teams with the detection of refugees on land and at sea. The 26-hour solar-powered Search-and-Rescue flight performed by AtlantikSolar is claimed to be the first-ever flight worldwide to combine:

The 26-hour flight was started in Hinwil, Switzerland with full batteries. The launch was performed fully autonomously. After all system checks were complete, the aircraft was tossed in the air via a hand-launch and then continued automatically and without pilot interaction towards its first loitering waypoint. The respective flight control technology is based on an ETHZ/3DR Pixhawk autopilot with a custom flight controller designed at the Autonomous Systems Lab.

Equipped with a color camera, thermal camera, an onboard computer and wireless LAN, the aircraft began live-streaming images. The full payload was operated until around 9pm, after which the color camera was switched off because of the insufficient lighting conditions. The batteries were at 95% state of charge at that time, having started their discharge shortly before 8pm. Operating a fully fledged SaR payload consuming 10W is a significant challenge for perpetual flight on a small-scale solar-powered UAV such as AtlantikSolar, and the overall power consumption of ~60W was thus closely tracked during the first hours of the evening flight.

The actual testing of the Search-and-Rescue capabilities was started shortly before 11pm. With the aircraft now flying in total darkness, the infrared camera served as the only source of aerial imaging information. The payload system clearly managed to find a refugee lying in low grass , differentiating from the thermal information given off by surrounding houses, tents, cars, the streets and an electric generator. The detection was performed manually by the ground station operator based on the live-streamed images this time. However, the next AtlantikSolar test flight will have automatic on-board detection (as already tested in the ICARUS search and rescue project) implemented.

Despite heavy winds of up to 8 m/s, the Search-and-Rescue support activities with the infrared camera payload were continued throughout the rest of the night. First sun occured at 06:20 local time, and the minimum battery state of charge was reached with 26% battery energy remaining at 08:04. Considering the additional payload power consumption (and mass) of 10W , this energetic margin – achieved about one month after the solar solstice on June 21st – is a success and exceeded the margin of 23% predicted by the team’s simulations. To accelerate the battery recharging process, the aircraft also implemented autonomous thermal updraft tracking that was enabled during the late morning once thermal updrafts were encountered. Multiple “free” altitude gains of >100m were achieved this way – again without any pilot interaction. The batteries were fully re-charged at 15:30.

As a final step, and after 26-hours of solar powered flight, the aircraft performed a fully autonomous landing at the Hinwil airfield. Using its lightweight LIDAR (Light Detection And Ranging) sensor to measure its distance to the ground, AtlantikSolar – a hard to fly aircraft that can usually only be steered and landed by extremely experienced pilots – safely performed the automatic landing. The team considers the demonstrated full flight autonomy a vital step to allow search-and-rescue support teams, which usually do not possess extensive UAV flight training, to benefit from the signficant advantages of solar-powered and high-performance UAVs.

GoPro’s Karma Drone Gets Its Debut On September 19