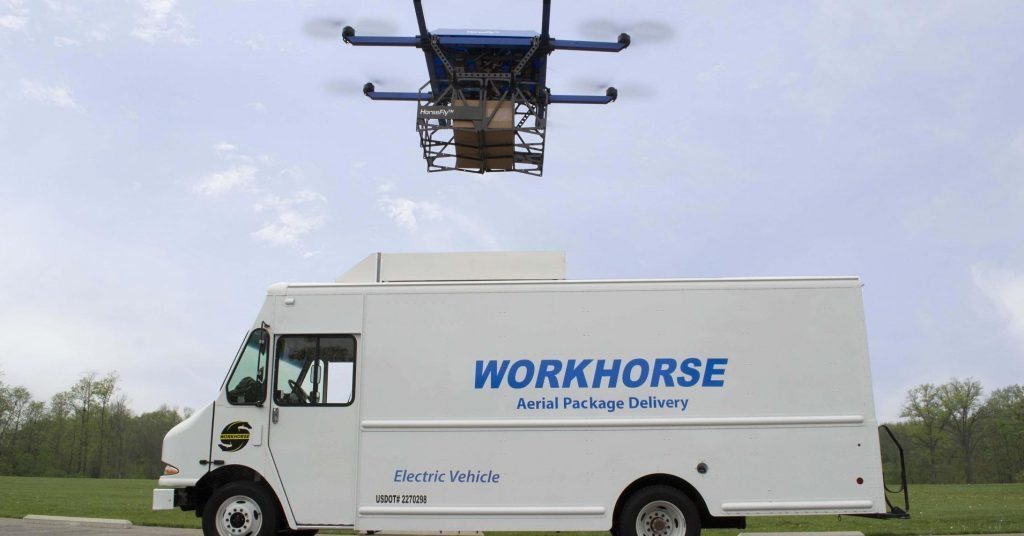 While Amazon is tussling with regulators over drone deliveries, one company has found a way to make the unmanned flying machines deliver packages today, by launching them out of the roof of a truck.

U.S. firm Workhorse has created a system called “HorseFly” that has managed to stick to the Federal Aviation Administration’s (FAA) latest rules.

The drone can travel at 50 miles per hour, carry a 10 pound package and fly for 30 minutes. Workhorse’s idea is to address the last mile of delivery – places trucks or vans can’t reach such as rural areas.

Earlier this year, the FAA issued new rules on unmanned aerial vehicles (UAV). One of the key points was that drones needed to remain in the visual line-of-sight of the operator, something that essentially thwarted Amazon’s plans for drone delivery.

Workhorse’s solution has been to place these drones to launch out of trucks because they remain within sight of the driver. Steve Burns, chief executive of Workhorse said that the drones remain within the line-of-sight of the truck drivers.

“We launch from atop the truck, and efficiencies are not as good as if you could just launch from 30 miles way, but they are staggering,” Burns told CNBC in a TV interview on Thursday.

Burns explained that drone deliveries are interesting because of cost savings. He said drivers are paid around $30 to $40 per hours and deliver between 150 and 200 packages. Drones however cost about 2 cents per mile because of electricity, and the fact that drivers are not involved.

The current solution, which requires drivers to take a truck to a location, then release the drone, is just the beginning of Workhorse’s plan.

“Like a lot of new technologies you kind of go for the low hanging fruit. And the long distance out in rural areas and some suburban, that’s the longest cost per package because it’s not very efficient for the driver or the truck. So you start there, then you move inland, if you can imagine a drone jumping up on top of a building, maybe, and there is a central landing spot where everybody picks up their packages…it could get that precise,” Burns said.

Of course, Amazon is continuing to invest in drone technology. Recent patents show the company’s potential plans with drones being perched in high places like lampposts ready to be deployed at any time.

But the FAA’s regulations are so far holding Amazon back. As a result, the U.S. e-commerce giant recently struck a partnership with the U.K. government to test its drone delivery technology in rural and suburban areas in Britain.

Burns said that the drone industry was “disappointed” with the FAA’s latest rules, but within them, the regulator has said companies can operate drones for deliveries if they can prove that you can stay within the rules and still be safe, an exemption Workhorse has taken advantage of.

Workhorse is developing and testing the HorseFly drone with the University of Cincinnati and is hoping to sell it to customers later this year.

Get Ready for the New Small Drone Rule!