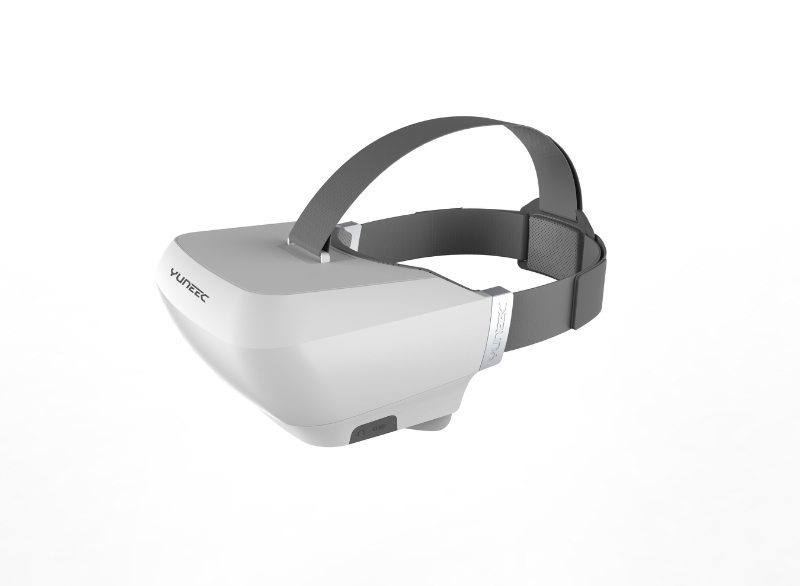 Yuneec International today announced the availability of its all-new SkyView first person view headset. As the world leader in electric aviation, Yuneec is the first major consumer drone manufacturer to offer its own FPV headset that allows users to operate via the onboard camera, watch movies, and play video games, among other capabilities. The SkyView FPV headset is now available at a suggested retail price of $249.99.

The all-new SkyView is an enclosed FPV headset compatible with the Yuneec Typhoon H and Tornado H920. The headset is equipped with a built-in 5-inch HD screen that transmits in 720p, a massive 75.5-degree field of view and a 16:9 aspect ratio for a stunning, life-like display.  While wearing the SkyView headset, pilots will be able to see exactly what the drone sees from its onboard camera – thanks to the built-in 5-inch screen offering a true “first person view.”  With an ergonomic design, SkyView features a durable and adjustable headband that’s comfortable and can accommodate glasses. Once pilots complete their flight, they can connect SkyView via the HDMI port to playback videos, watch movies, gaming, and more.

“At Yuneec, our engineers are always pushing the envelope to develop creative solutions that deliver the best experience for the consumer,” said Yu Tian, chief executive officer of Yuneec International. “The SkyView FPV Headset elevates the flying experience for Yuneec pilots by literally putting them in the driver’s seat of their drone. While operating the drone, they’ll have more confidence, enhanced perspective and more creative possibilities at their disposal. When not flying, it’s an incredible way for users to immerse themselves in video games and movies.”

Yuneec announced the expansion of its Typhoon series with the unveiling of Typhoon H at the 2016 CES Show in Las Vegas. Typhoon H is equipped with six rotors and a 360-degree gimbal, which allows unlimited panning for breathtaking 4K videos and 12 megapixel stills with the all-new CGO3+ camera. In addition, the landing gear retracts during flight to seamlessly remove itself from the shot for unobstructed views. Typhoon H also has a variety of flight and image capturing modes, including Point of Interest, Orbit Me, Watch Me, Follow Me, Curve Cable Cam, Journey Mode, and Team Mode for film and photography teams. Innovative new safety features include ultrasonic proximity detection to assist in avoiding large obstacles and a six-rotor safety failsafe system, which allows Typhoon H to remain stable and land if a motor should fail.

Yuneec also offers the Typhoon H Pro package, which includes Intel® RealSense™ Technology. The Intel RealSense R200 Camera and the quad core Intel® Atom™ processor module work seamlessly with the flight control firmware to add intelligent obstacle navigation. With a combination of specialized cameras and sensors, this system recognizes each obstacle in its path and creates a 3D view of its environment, which it maps and learns in real time. It then plans an alternate route and safely navigates around obstacles. This is a major advancement over ultra-sonic collision prevention, which automatically stops Typhoon H short of obstacles, but cannot model the environment or intelligently reroute around obstacles. The module also adds downward facing sensors to improve stability, enabling flight indoors or outdoors close to the ground, even with poor GPS reception.

The Tornado H920 is a professional multirotor aerial photography and videography platform. It is compatible with two camera options: the industry standard Panasonic GH4 and Yuneec’s CGO4 gimbal camera. The H920 features landing gear that retracts during flight to seamlessly remove itself from the shot for unobstructed views, is equipped with GPS positioning, compass orientation, and pressure sensor lock altitude, and can handle a payload up to five kilograms.

The SkyView FPV Headset is available for $249.99 at retailers and online at www.yuneec.com/skyview