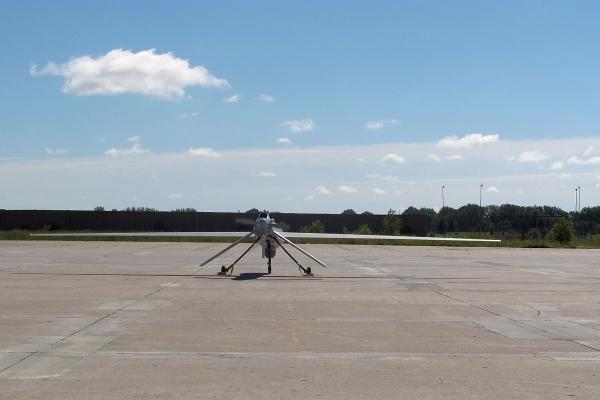 GRAND FORKS AIR FORCE BASE, N.D. — A major defense contractor and key player in the nation’s first unmanned aircraft business and technology park is up and flying in North Dakota, much to the delight of state officials who have pumped millions of dollars into promoting drones.

California-based General Atomics Aeronautical Systems Inc. signed a lease agreement last fall to open a flight academy in the Grand Sky drone park, and then built a temporary hangar so it could begin flying as quickly as possible.

“We’re open for business,” Dan Fritz, the company’s director of international programs, said Wednesday about the first Predator drone flight from the facility located on the Grand Forks Air Force Base.

The company put its facility on the fast track, primarily to help fill the need for unmanned aircraft pilots and separate its training operations from testing and production. North Dakota’s uncongested and unrestricted airspace was too good to pass up, Fritz said.

“What we’re doing up there really is groundbreaking,” Fritz said.

“There isn’t one more thing that has to happen. We are operational. It’s all done,” Swoyer said. “Now it’s just a process of filing a flight plan, getting on the schedule and radioing the tower when it’s time to go.”

A ceremony is scheduled Thursday to mark the beginning of operations for General Atomics, one of two major tenants at the 1.2 million-square-foot park along with Northrop Grumman. North Dakota Gov. Jack Dalrymple said General Atomics wants to be the “go-to company” for training.

“This is the next important step in an emerging, evolving story,” Dalrymple said. “It has been unfolding very rapidly since 2013. The progress has been real.”

North Dakota has spent $34 million toward drone projects and education, including $13 million for Grand Sky. Swoyer said the park has received $16 million from the private sector, and it still has 16 or 17 more lots to fill.

“We have been investing over a period of several years,” Dalrymple said. “Now we have reached a critical mass where the investments are coming to us.”

Ultimately, Swoyer said, the training, research and development spearheaded by the two anchor tenants will lead to commercial development in the energy, agriculture and other civilian markets.

“We need a place where that conversion can happen and really that’s what Grand Sky is about,” Swoyer said.