Lockheed Martin Is Designing a Laser to Defeat Drone Swarms

It starts as a speck on the horizon, just a speck, no bigger than the tip of a pencil point. Then it grows, as the convoy continues to travel along its path. It’s not one speck, but many. Small drones begin to expand into the sky, and suddenly the specks become a swarm that extends above the horizon.

An operator is already tracking the swarm through the battle management system. The laser weapon system is ready to fire. They’ve been training for this moment, for this threat. On command, the operators begin the coordinated approach they practiced so many times during training exercises.

For a split second, it appears that nothing is even happening as the laser weapon system locks in on its target, but it quickly disables the drones.

FROM SMALL DRONE TO LARGE SWARM 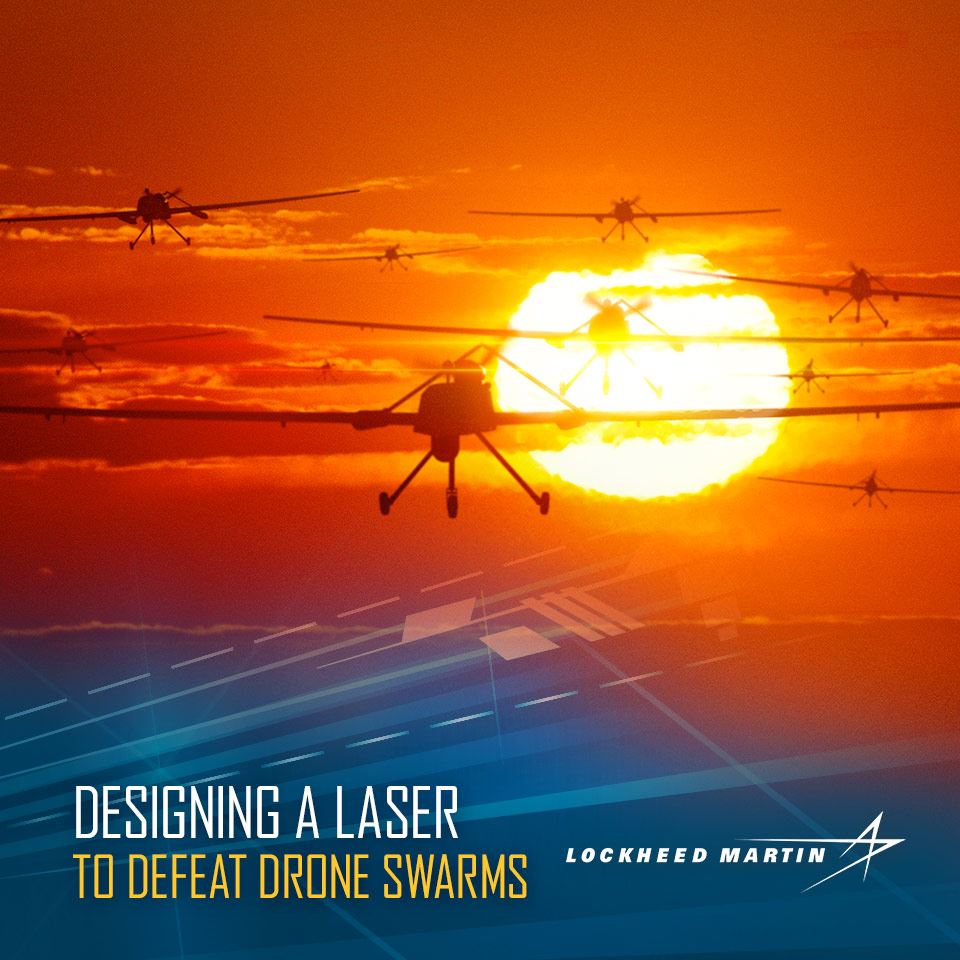 This is just an example of a potential threat caused by armed drones in the wrong hands. And it’s an example of the solutions Lockheed Martin is developing to address this threat. Drones may be small – some weighing less than five pounds – but they can cause devastating results if they are armed with weapons, and when there are 10…20…100… in close proximity. Drone swarms can be remotely operated from miles away, fly autonomously, or they may accompany ground vehicles and other aircraft that attempt to harm our troops. And only one of these remote-controlled weapons needs to get through to be potentially lethal.

“Terrorists and other militants can operate small, inexpensive drones loaded with weapons to threaten U.S. and allied forces on the ground,” said Daniel Miller, chief engineer for High Energy Laser Integration at Lockheed Martin Skunk Works. “Because of their size, these drones are difficult to see, hard to catch on radar, and hard to shoot at with conventional weapons, particularly in swarms.”

Ground vehicles are designed with armor and muscle like missiles and gun power, but using a missile to destroy so many small targets comes at a significant cost and time expense. In comparison, a laser weapon system’s ‘bullets’ are considerably more affordable than missiles and gun power, especially when combating so many targets.

Lockheed Martin engineers are collaborating with customers and academia to research, develop and implement the technology that will detect and defeat swarms.

Because the system relies on many modular fiber lasers, it is easily scalable to meet different levels of power. With this parallel approach, there is no single point of failure that will compromise the laser’s power and functionality – as long as power exists. The laser weapon system can fire over and over, essentially creating an unlimited magazine of ‘bullets.’

Contrary to popular belief, the laser is actually invisible to the naked eye. Once it starts up, it is steadily sent through a beam control system that ensures it can accurately aim, target and destroy the threat – at the speed of light.

Our high power laser approach operates with an efficiency that generates less heat and can be contained in smaller packages than previous laser technology, said Afzal, which means it can serve on board multiple platforms.

So what happens when a swarm approaches from multiple directions?

Detect:  First, the communications and battle management system would detect the threat and begin to track the drones, triggering a ‘kill chain’ to begin its execution.

Identify:  As part of the kill chain, operators would monitor the progress of the targets, and identify whether they are friendly or unfriendly.

Defeat:  To defeat the threats designated as “unfriendly,” troops would activate the laser weapon system, using its beam director and turret to aim in all directions.

LOOKING TO THE FUTURE OF LASER WEAPON SYSTEMS

“As we prepare this critical technology for the future, we’re already demonstrating the potential of laser weapon systems to take on new threats,” said Paul Shattuck, director and chief engineer of directed energy systems at Lockheed Martin Space Systems.

Through internal research and development, Lockheed Martin engineers developed the Area Defense Anti-Munitions, or ADAM, prototype, which has successfully defeated small boats and rockets, while the Advanced Test High Energy Asset, or ATHENA, system has stopped drones and a truck in their tracks.

Lockheed Martin Mission Systems and Training is under contract to complete lab testing of the 60-kilowatt laser for the U.S. Army. The laser will be supplied to the Army by the end of 2016 to support the Army’s integration and test activities on a large modified truck.The ground-based laser weapon system will be used to destroy rockets, artillery, cruise missiles, drones, and other trucks or ground vehicles.

“Ultimately, we’re working toward a solution where our customers can integrate these systems onto aircraft, ground vehicles and ships,” Shattuck said.

Surveying And Mapping: The Right Tools For The Job