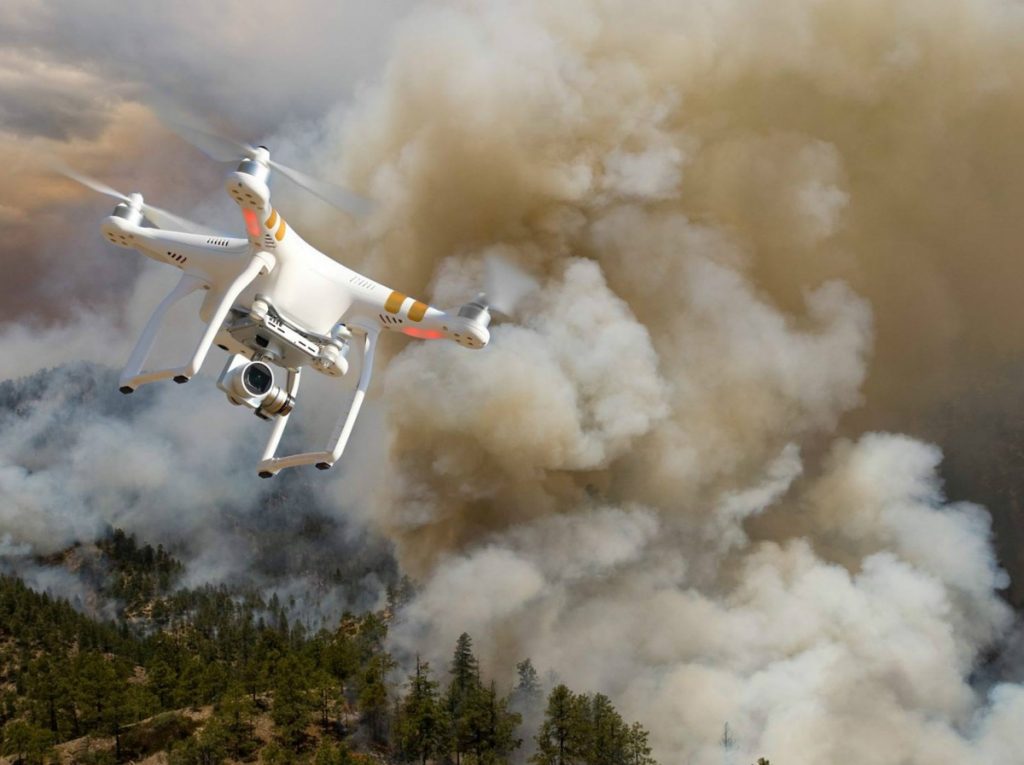 “This pilot project makes initial wildfire location data publicly available to commercial mapping providers that support UAS operations, alerting drone pilots before they enter air space over an active wildland fire,” said Mark Bathrick, the director of Interior’s Office of Aviation Services. “No responsible drone operator wants to endanger the lives of the men and women who work to protect them and we believe this program, which uses the global positioning system to create a virtual barrier, will move us one step closer to eliminating this problem for wildfire managers.”

The Department of the Interior developed the system with DJI, the largest manufacturer of unmanned aerial vehicles in the United States, and AirMap and Skyward, leading providers of airspace intelligence and navigational services to unmanned aircraft. AirMap and Skyward now obtain wildfire information directly from Interior’s Integrated Reporting Wildland-Fire Information (IRWIN) program, and immediately transmit it to drone pilots through AirMap’s iOS and web apps, AirMap’s API, and the GEO geofencing system included in the DJI GO flight control app.

Privately flown drones pose serious risks to firefighting planes and helicopters because these support aircraft fly low and slow, in smoke-obstructed areas, and their pilots are preoccupied with positioning to release water or fire retardant.  When drones enter air space over or near wildland fires, they force managers to either delay or cease aerial suppression operations, impeding efforts to control and contain these destructive blazes and placing firefighters and the communities they protect in greater danger.  Wildfires can grow larger and more destructive during these delays.

More than 30,000 wildfires burned over 2.7 million acres across the United States this year; and more than 15 drone intrusions already affected aerial firefighting operations in California, Arizona, Utah, Nevada, Alaska, Minnesota and Montana.  Several of these resulted in grounded aircraft. On the recent Saddle Fire in Utah, incident managers suspended aerial support to firefighters five times.  From 2014 to 2015 drone intrusions over wildfire incidents more than doubled, when 21 drones were spotted and aircraft were grounded six times. Twice firefighting aircraft had to take evasive actions to avert a collision with drones.

The FAA prohibits private drone operators from flying above 400 feet, and explicitly requires them to keep clear of piloted aircraft. While the FAA establishes Temporary Flight Restrictions over most large wildfires and charts them on aviation planning tools, 98 percent of wildfires are controlled within the first 24 hours, before fire managers request Temporary Flight Restrictions.

“Now, thanks to the wildland fire reporting data provided by Interior and with great partners like AirMap, Skyward and DJI who volunteered to prototype this program for us, we can make this information available to drone operators in near real-time,” said Bathrick.

The warning system is similar to current efforts that map drone-sensitive locations (e.g. prisons, nuclear power plants, etc.). Drone manufacturers now have the ability to automatically ‘geo-fence’ wildfire areas from entrance by the unmanned aircraft system they build and sell.  Experience and data obtained from this year’s prototype will be used to inform a full public and industry release planned for the 2017 fire season. In the future, the system will have the capability to prevent drones from operating in restricted airspace once they reach a geofence perimeter.

No Replies to "US Gov Partners with DJI, Drone Industry To Eliminate Drone Intrusions"