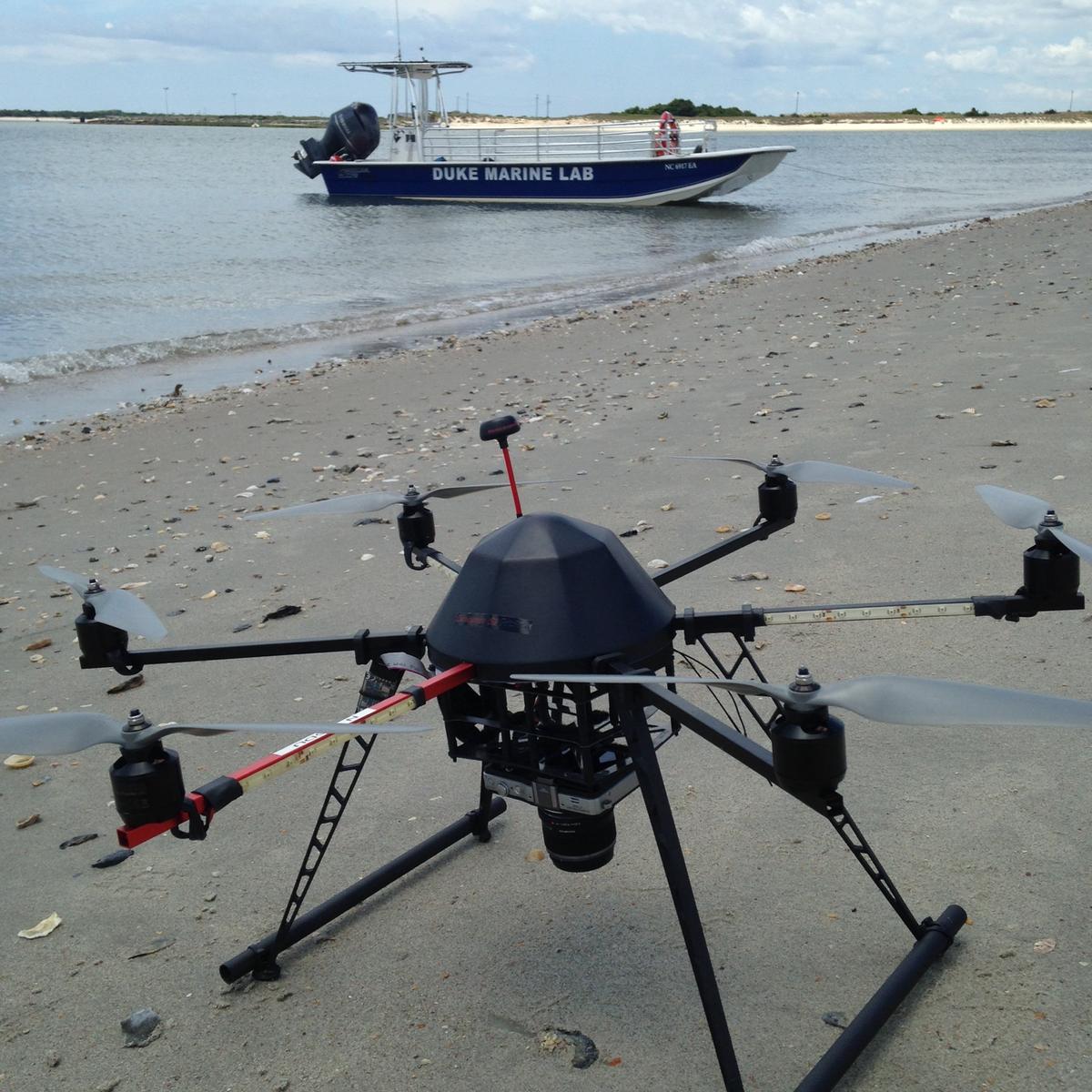 A team of researchers are conducting their annual sea turtle survey at the coast this summer.  But this year, they have a new tool to give them a bird’s eye view.  Drones equipped with cameras fly over the water and capture images of sea turtles from above.

The Federal Aviation Administration recently approved commercial drone flight.  Operators must adhere to strict guidelines like flying during daylight hours and keeping the unmanned aerial vehicle under 400 feet.  Still, the landmark rules open up a realm of possibilities for real estate, filmmakers, search and rescue and many other applications.

Here at the coast, Assistant professor of the practice of marine conservation and ecology at the Duke Marine Lab Dave Johnston has been exploring the potential for drones to aid in marine research.  He’s assisting with a sea turtle survey this summer.

“This research is part of our efforts to answer basic questions about sea turtle populations with one of the most important being how many are there?”

“We were looking at the Cape Lookout Bight sampling area as a sea turtle hot spot where we might encounter a good proportion of the population to catch them and look at how many turtles we recapture then to get an idea of population size.”

Sea turtles typically pass through North Carolina when migrating from tropical waters to northern areas.  During the spring, Avens says locals have noticed an uptick in sea turtles in an area less than a square mile – known as Cape Lookout Bight.

“So a lot of the cobia fishermen that go out to that area report seeing sea turtles popping up all around.  And it’s based on that sort of local lore and local knowledge and preliminary surveys by the North Carolina Maritime Museum documenting large numbers of turtles in that area that we wanted to go out there and quantify what we were seeing in terms of the size of the population, the species and the size distribution.”

Avens says a preliminary study was done 2007 to 2009.  They’ve been conducting regular surveys since 2014.  And this year, for the first time, they are using unmanned aerial vehicles to help count sea turtles. Johnston says fixed wing drones with cameras attached are launched from shore and use GPS to follow a planned route.  They’re also using quad-copter UAVs deployed from a boat – flown real time – to take pictures from above.

“They have different strengths. Multi-rotor platforms allow us to fly a little bit lower and can produce much higher resolution imagery. But they can’t cover the same amount of area, so we see the two platforms being complementary where you may be able to do broader scale surveys with the fixed wing, and then focus in on finer areas with the multi rotor to collect high resolution data.”

Johnston says they’re in the process of going through photos, so they don’t have an exact turtle count right now.  But, he says they’ve identified loggerhead and leatherback sea turtles, which are endangered and critically endangered, respectively.  NOAA Fisheries biologist Larisa Avens says they’ve noticed an increasing proportion of young Kemp’s Ridley in Cape Lookout Bight, the most endangered species of sea turtle.

“Based on recent observations, it seems like the area is perhaps even increasing in importance for foraging for these small juveniles.”

While drones are buzzing overhead, Avens and her team use entrapment nets to catch sea turtles.

“This also gives us opportunities to measure the turtles to figure out if we’re seeing juveniles or adults, what species we are seeing, because North Carolina does regularly host four different species in its waters, both nearshore and inshore, and also collect biological samples that can help us study the populations.”

Avens says they are attaching satellite and acoustic tags to track their movements and behavior.  Scientists are also trying to understand why sea turtles congregate in Cape Lookout Bight in such large numbers.

“We wanted to see whether turtles were coming there because they were breeding, so whether it was mostly adults.  And the nesting females were there before they started crawling up on the beaches to lay their eggs.  Or whether there was a lot of things there for the turtles to eat? We were seeing a lot of loggerheads, so we were thinking maybe there were a lot of crabs there or mollusk.”

The coastal geography may be a contributing factor.  After Cape Lookout juts out into the Atlantic, the coastline back end hooks around and forms the bight.  Avens says sea turtles patrolling the coastline can find themselves in the bight when migrating.

This year’s survey started in May and so far, Avens says they haven’t counted as many sea turtles as in years previous.

“We seem to have a lull in the numbers of sea turtles that we encounter.  So overall, our capture rates were down a bit.”

But the survey isn’t over yet.  Avens says they will continue testing the UAS in inshore waters.  They also plan to conduct surveys in Core Sound and Back Sound in the coming weeks.  The survey will wrap up in November.  I’m Jared Brumbaugh.

No Replies to "Scientists Counting Sea Turtles With Drones"